i’ve been to see more shows in the last 3 days than i have in the last 3 months. it’s like mainlining nicotine after being a social smoker – full-fuckin-on. but ace. totally ace.

there are a few stand-out shows for me so far and i just need to rave about them for a bit. 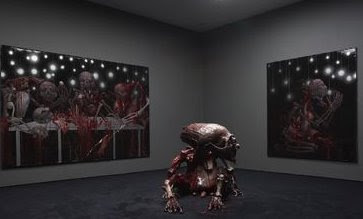 more specifically, the sculptural work that is splattered on the carpet on the top floor of hoxton square gallery. it is pretty impressive and quite revolting, in a delicious way. i think if it wasn’t installed in a grey room, with lower lighting – after a pretty innocuous show downstairs, it might not be so memorable for me. but it was and it was. the detail and the gore is great – never has a partly flagellated skeletal form looked quite so luscious.

i’ve been holding off on seeing the rothko, thanks to dear friends giving me free tickets, etc, etc. so when i went the other day, it was really to check out some of the other free shows. conceptual models is one of the most awesome shows i’ve seen in ages. i know that sounds like quite a big call, but for me it really nailed it. it was large enough to get a bit of a scope of the theme (artists working with/within architectural frameworks and ideas), was a theme that i totally dig, because i’m a self-centered gal and love seeing shows about work i make; and was still tight enough to not feel completely swamped by filler and/or overkill.

some of the great works i loved included some white langlands & bell (my new favourite artists) models of ivrea, also known as olivetti-city damian ortega‘s skin works: cow-hide modernist housing plans, strung up like carcasses; ephemeral modelling work, cedric, by koo-jeong, a and thomas demand‘s tavern – sets and photos of the site of (i ♥ thomas demand). they were just the absolute highlights, but there wasn’t really a work in there that i didn’t love.

unfortunately, there was nothing but the suggestion of looking it up on the internet to take home with me. not even a room list/publication thing like there usually is. i was a bit disappointed about that, but thankfully the list of works is on the tate site. i had been looking forward to seeing this exhibition for a while – i bought advanced tickets from oz, that’s how excited i’ve been about it. and i didn’t even really know that much about the designer before then, but i just knew it would be a good show.

the works are fantastic – chalayan is into multi-disciplinary design and story-telling is a major aspect of his collection. and that collaborative/wholistic approach has been taken into the exhibition design too – done by an architectural firm, the whole experience is amazing and a little blade-runner-esque (do all good architects like blade-runner). each room is a difference ‘illustration’ – fig. A-R of the fashion work, but is an installation in itself. chalayan also does fantastic films, several of which are showing at the museum, including one featuring the amazing tilda swinton. born in cyprus, working in london, chalayan’s work, and especially this show, has the feel of exactly those two places – absolute high-density innovation and sparse romanticism. in fact, there was something about the show that reminded me of australian artist hussein valamanesh.

if you’re in london between now and may, and have even a passing interest or understanding of fashion/design, go see this show. it’s brilliant.