talk about seeing red… i love this bit of neo-actionism.

thanks to gemma jones, via krink, via glitsch.

as seen in brighton, UK. via wooster. [click to enlarge] 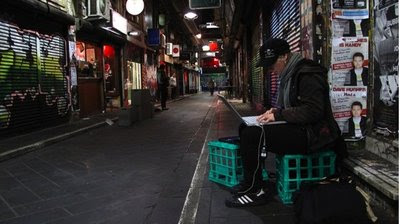 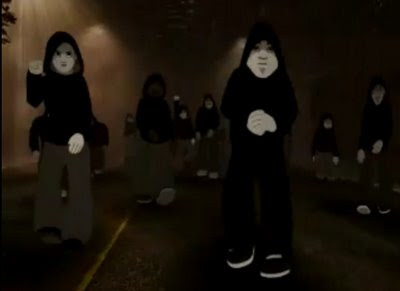 some jealous fuckheads kids tipped chrome paint down the back of the protective perspex, tagging ‘banksy woz ere’ on top. and as much as i find it ever-so-mildly amusing, i still can’t work out which i find sadder – ignorant bureaucrats from the tower of hamlets in london buffing over the helicopter because it’s just graffiti to them, or calculated and jealous artists/wannabes making a spectacle of its demise. ignorance or spite? which is most loathsome in a person. which is more dangerous?

as ridiculous as it was that the diver was covered in perspex, i was rather proud of melbournians attempting to preserve its street-art history. no-one tried to rip it off the wall and sell it. it wasn’t hawked as a money-maker, but was revered in its own way. perhaps more than it should – especially seeing as other well-regarded street artists get their work buffed all the time. but it says something about melbourne as a city, that a world-famous artwork sits proudly amongst the rats, on a building full of artist studios that has its drainpipes covered in gold-leaf as part of a public art program.

and i feel quite sad that is has gone now.

i hope that the pranksters look back and are proud of what they did. i hope they documented the process, have their own website about it, have put a vid of the event on you tube, have made limited edition reverse prints of the marker text and are working on following banksy around the globe, splashing over his other works as a political statement against the commercialisation of an essentially rebellious art form intended for the ghettos of america, and not the living rooms of the white nouveau-riche.

i want the spectacle of destruction to be a real spectacle. a show-stopper. a life saver, a fuck-off blast off and “holy fireworks batman!”. i want them to have done this out of a wider, more noble reason than an insipid combination of puberty, jealousy and some desperate need for 15 megabits of deluded viral fame in which they are a david to banksy’s goliath.

somehow, i don’t think i’m going to get what i want.

EDIT: banksy, if you did this yourself, i’m still cross. but i’ll forgive you eventually. and if you were in town, why didn’t you call?

i love smith st. no, really i do. i love a place where you can get A1 coffee, smack, trams, bikes, hookers, hippies, 4WD mumsies, street art and blue-chip galleries all in the one place.

image thanks to sar at well fed, well read 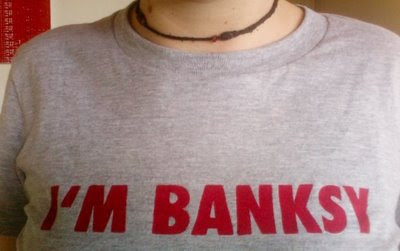 funny how things can stick around. after my rant about street art and marc’s article, the debate “is it utopia or just a bit boring” from the tate street art show turned up in my tate itunes podcast subscription. the two debater were evening standard critic ben lewis and time-out writer ossian ward and it is particularly hilarious. while i can’t quite get my head around some of his reasoning, ben’s dry, nihilistic humour about street art and himself is really amusing and ossian’s picture of art’s future is deliciously bleack and his responses to ben are so sharp. great stuff.

listen to it here