After having to deal with ridiculously toxic fumes seeping into our building yesterday, we all scampered off from work to save what was left of our vital organs and I found myself with an opportunity to catch up on some more of the biennale.
I decided to catch up on the ACP to see the work by Olga Chernysheva and to wander up to the National Art School to check out the Ranjani Shettar, a work I had seen a preview of in the ‘comfort zones’ intranet terminal at the MCA and was busting to see it. I popped into the other gallery space at NAS first, to check out the other 2 works as a token jesture. The space itself was amazing – it was where i used to spend many an hour – where the library got moved to in my 2nd year and rightly so (or perhaps coincidentally, although i like to think not) the Emily Jacir book works were there. Both aspects of it looked amazing and the story behind it was great as well, although I really was just there for the Ranjani Shettar. 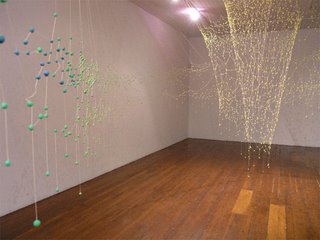 Now I’ve been banging on about the Antony Gormley Asian Field since the first day of the Biennale and thought that nothing came close to topping it. Well, Ranjani’s work has marching in to a very close 2nd on my list of alltime favourite works from Zones of Contact, as I knew it would. The work is exquisite to the same degree that the Gormley is grand. The beads of dyed wax held together by jute are amazing and are almost stellar in their composition. The huge nets of colour gradation are set out in waves, which relate to the theme of water (according to the interview on the afformentioned intranet), and although i saw that aspect and was impressed, my own personal joy came from the idea of these works being constellations, mapping out stars, planets, universes, peoples, systems, souls. The whole thing seemed quite cosmic and a non-hippy kind of way and it made my spine tingle. That’s 2 works that have made my spine tingle from this festival – that’s not bad. And because the Shettar was a single work in an amazing gallery space, previously the gaol chapel, it was given the reverence it required. I know that not quite as many people will see it as if it were in the AGNSW, but I think it deserved the quietitude and solitariness of the NAS Chapel, over and above marrauding hordes of school kids and pensioners on bus tours. 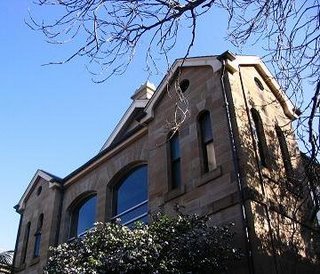 Hanging out at the National Art School, I caught up with dear friends, Sarah Mosca, Damian Dillon and Paolo Iarossi, great artists who work there, who I’ve previously worked with and who I went through the school with. It was fantastic to catch up on the gossip, discuss our dreams for the future, what we’d be willing to put up with as far as constraints on our work and what we’re working on now. And I realised that I have become incredibly sentimental about my old college! I missed seeing these guys on a regular basis, I missed aspects of the campus, I even want to exhibit in the new spaces once they become available (note to the new curator of the NAS galleries) -can you believe it?! If someone had’ve said to me 3.5 years ago that I would be having lunch with ex-classmates and TAs, I’d be cooing over the campus and wanting to exhibit as alumni, I think i would have spat in their face! Now, I’m realising how important it really is in my life. Now I don’t think I’m going to go out and sprout about the place or get all bombastic about it, but it’s kind of nice to think that I have a whole resource of ex-students and teachers that I can still use and that having that sense of ‘family’ or companionship in the mire that is the local art sector, is worthwhile. Now that I come to think of it, it was probably one of the reasons I went to art school in the first place!