last year i was too caught up in the end of a residency to mark world listening day on the 18th july.

this year, that’s not going to happen. i’ll be doing a 6-hour listening work in berlin and transcribing the outcome of that onto wall in public. a little like the listening to berlin works i did in 2010, or those done as part of the AURA project last year, a bit like all my works lately.

i’ll keep you posted, closer to the date.

and thanks to the world listening project twitter and the sound studies blog (also pushing sound studies into the red), i discovered a post by aaron trammell about transcription and embodiment of music into other forms.

he discusses the process of listening to lyrics (by The Fleshtones), transcribing them and the difficulty/slight unsatisfaction of completing that task thanks to the switch between modes of thinking. 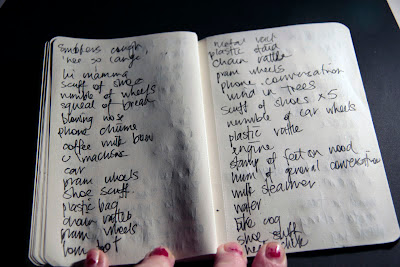 oh how i can relate.

in my listening projects, i’m constantly transcribing the city’s ambient sounds from a listening action of sensation, to the domain of language and text.

like the Fleshtones track in aaron’s article, ambient sound is difficult to transcribe. although unlike music – with its cultural history of written lyrics and coded notation –  there is no language-based culture for, say, the sound of a car driving across cobblestones. the general public just hear those sounds, or respond to what they mean. very rarely to you explain those sounds, much less transcribe them.

so when i’m doing the work, i just have to write it how i hear it, without resorting to onomatopaea – switch between hearing and understanding and explaining and conveying.

which is part of the exciting thing (for me at least) about the action i undertake during those works, but also about the words that come from it: anyway, i digress, this year on world listening day, come and find me. i’ll be making a monument to the noble action in public. somewhere in berlin. and i’ll be doing some embodiment and transcribing. and standing around wearing headphones and writing.

it’ll be just like writing down lyrics, but to the world.