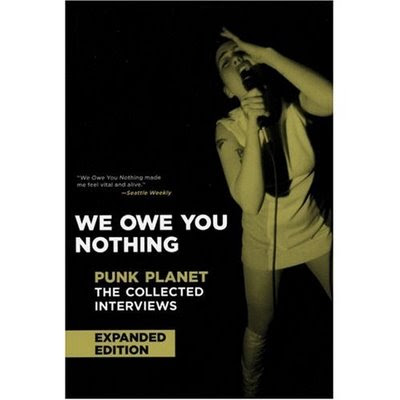 i’ve been reading interviews from punk planet recently and came across one with winston smith. i’m ashamed to say i had no idea who the man was. i mean, i knew what he did, loved his artworks, but i didn’t know that was his name. my friend even had his IM name as winston smith and i never thought to ask him. turns out, he’s the guy responsible for the DK Dead Kennedy’s logo. And the album artwork for In God We Trust, Frankenchrist, Give Me Convenience, etc, etc, and a tonne of politically motivated collage works, used by american punk bands of the 80s and 90s.

anyway, in the interview, smith talks about the importance of art in political messages, the collaborative process between him and jello biafra and his process of collage and straight-up narrative. i was totally inspired by him, until he and the interviewer josh hooten started talking about ‘high art’:

WS: “.. every now and again I’ll open one of those magazines like Art In Ameria or some other big-time gallery magazine and I’ll see photographs of rooms with little piles of sand in them with a string running from one end to the other or a pile of twigs. I don’t know, call me old-fashioned, but I can’t scope that at all! It’s so obscure. But some people pee their pants over this stuff and I wonder what I’m doing wrong. Maybe I should do some bullshit installation like that and people will just start offering me money. Sometimes I just scratch my head and wonder why, if they’re really trying to say something, don’t they just come right out and say it?”

JH: When I was in art school, I produced… work that didn’t require a reading list for you to figure our what the meaning was. But there were so many people who were wrapped up in being vague for the sake of being vague that my friends and I, when we would see this kind of work, would just attribute it jokingly to the artist “working out their inner struggle”.

God how i wish doing bullshit installations would guarantee people throwing money at you..

And while I wholeheartedly applaud not taking oneself too seriously, and hate the art wankers as much as anyone else, I think a prescription for art only being explicit, or self-explanatory, or just political is as dangerous a proposition as art only reflecting the party line, or other such socialist realist maxims.

And I agree that art can be intimidating and exclusive through its written communication (right doddsy?), but ultimately i think not understanding art is actually vital. if you translate the idea into literature, hooten and smith are basically suggesting that all art has to be either political propaganda, detective novels, or Hello! magazine. surely finnegans wake in its deconstructed madness is as vital to the written word as catcher in the rye. Surely haiku poetry is as important as the 4/4 anthemic singalong?

installation art, conceptual art, etc is the difficult poetry to the airport novel: yes, it’s a pain in the arse to try and understand. you have to take time. you may have to have a reading list. and actually, i think the valid criticism of high art from an underground perspective is the commodification of it and the slimy, manipulative aspects of the industry. but if being punk, underground or political means taking away the mystery or the poetry out of everything, then fuck that.