I’ve just come back from the pub, hanging out with Jaki Middleton, David Lawrey and Kathy Gray after the opening at the Wollongong City Gallery. Jaki and David’s work The Sound Before You Make It is showing in the Mercury Gallery at the moment and it’s so refreshing to have some cool shit to see in town at the moment. I feel like going into the space every 20 mins, just to get my groove on. In fact i feel like going in there every 20 minutes with a stack of friends and dancing to it with all the Thriller moves so it really feels like a party! I can see why a kid nicked one of the figures when the work was at Campbelltown.
It was also pretty cool to have the sydney kids in town – introducing them to sushi train, exposing them to the dive and comfort of the oxford tavern and giving them suggestions of cool things to do in Wollongong, and I realised that I’m a terrible tour guide. They’re going to check out Project tomorrow, which is cool. Hope they like it – I’m becoming more proud of the space the more I find out about other spaces, especially the other ARIs in Sydney.
At the opening at MOP last night I was talking to a friend about sitting spaces and having people come to see work there and he was saying how few people the artist run spaces get through the door in the big smoke. I was proud to say that liminal had 640 checking out the show over the 2.5 weeks it was open. That’s a pretty good turn out! I think it’s the 2nd or 3rd largest show we’ve had since the gallery opened and it actually measures up to the what the ‘big kids’ are doing elsewhere. OK, so the rest of the shows they may put on are kick-ass all the time, but hey, we’re getting there. 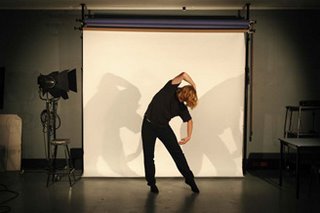 Speaking of the show – it was so awesome to see a show that was genuinely entertaining. I’ve known Christopher Hanrahan a while, so I knew it would be fun, but it was a ripper. His performance video was so cooln – He spelled out in human letters (YMCA style) ‘the old grey mare, she ain’t what she used to be’, while singing it, a la the Simpsons. You couldn’t hear it when the opening was in full swing, but being a girly swat, i got there early and experienced the joy of it as a whole – it was ace! And the other highlight for me was the smell of the packing crate work – Falling Down (?). The smell? Yeah, i know it’s weird, but the warmer the piece got, with the lamps inside it, it emitted this wonderfully nostalgic smell of warm wood, reminiscent of cosy places and open fires or saunas, or something comforting. It was probably so far from the experience Chris intended from the piece, but hey. His coffee mug tree was choice – so precise, yet so precarious, which I think is Christopher’s artwork in a nutshell.

I’ve got an appointment with the tax gal in the morning before an artists’ lunch for the liminal personae kids tomorrow, so I’ll do a wrap up blog about the show and a guide to finding a good artists’ tax agent over the weekend sometime.