initially this was going to be a post about the state of design festival, a project that i planned and one organised by those fabulous ladies over at architecture + philosophy. it was going to be about the future of acoustic spaces, one of choice and the generation which has a commitment to choice.

but instead it’s going to be about backing out of a commitment in order to preserve ones integrity. about not designing for the sake of an opportunity, but having the restraint to remain authentic to a level of quality and/or clarity of message.

you’re all sick of hearing about my research into sound in the public space, but when i was working towards project for this final semester, i checked out to see what the state of design and their fantastic cultural program were doing, remembering that their theme was ‘sampling for the future’ – what an awesome partnership: sampling, sound, choice, the future, architecture/design and public space. 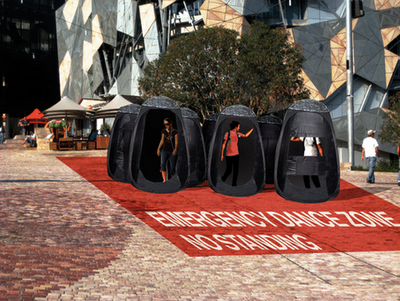 i got in contact with the peeps at SoD and it was all very exciting – a last-minute inclusion, but one which could still happen in the 6-week turnaround. sometimes, when the timing is right, everything just flows and you can pull off a project in record time.

this was not one of those times.

as soon as we locked it in, everything just ground to a halt: suppliers were out of stock, samples couldn’t be shipped and, more importantly, i just couldn’t unlock any money from anywhere and i was fast running out of time to find some. [granted, it’s not my field of expertise and i’m sure if it was i would know exactly where to find some, but hey – i is what i is].

i started to be anxious all the time – losing sleep about where i was going to find the money for this, how could i source that from overseas to save time, how could i work the timing around work and i needed to brief the volunteers. the list of things to do kept getting longer and longer. and i wasn’t kicking any goals. as each day towards the deadline kept ticking over, the project was getting less and less finished. it was going to be a really crap install, the way this was going.

and, more importantly, i was miserable about it.

i had no faith in the work, i was barely talking about it – i sure as hell wasn’t promoting it anywhere until i had a level of satisfaction about it and i was losing any kind of perspective, commitment and aesthetic judgment, fast. i was hemorrhaging.

so, whilst at the ballet with my mum, after barely noticing the first act, i decided that i needed to pull out of the project. i needed to risk disappointing a few, in order to salvage the best parts of the idea. to not present a half-baked design which would benefit, delight or inspire no one. i made a commitment to the future i designed. just not together. and just not right now.

i can’t tell you how much lighter i felt. it was instant. and i suddenly had room in my head (and excitement in my heart) for the other projects i was working on. i suddenly had some clarity about works that really did have enough time. and enough money. and i knew that i had reached some kind of milestone – some weird internal rite of passage, where i had said ‘no’ to a great opportunity, for the sake of my work. it seemed almost old-fashioned (you young whippersnapper, you).

unsurprisingly, i had a whole swag of support for this lack of commitment. LI, NT, DR and GJ were all stellar. and of course my mum was delighted. not just because i paid attention to the second half of the ballet, but nothing worries a mother more than seeing a furrow tattooed into her child’s brow.

so, today i make a commitment to the future we design together. by pulling out of projects, in the interest of my own integrity.
and in doing so, i commit to the value of that design and of that future.