some of you may recall that i decided to buy a new magazine a fortnight. well, i’ve continued on that front, so have a little stockpile of interesting bits and pieces to read.

since i finished reading my book and couldn’t quite work out where to go next, i decided to just catch up on all the magazines i’ve managed to collect on my ‘to read’ pile. i’ve had some real joy discovering some great articles, new mags and i figure that it’s about time i shared them with you:

monocle is ace! it covers Affairs, Business, Culture, Design and Edits.. a little like Time, but monthly, and lovelier. The ever-talented Mr Hill has been seriously involved in starting the mag, especially its great online element, but is sadly leaving. He talks about the mag in much more depth here, so read that.
The bits that I loved included the discussion on trains and train travel, the snippets of info from around the globe: including a super clandestine mission to Mugabe’s Zimbabwe (before the fall, obviously); discussions with Lebanon’s answer to Veronica Guerin, May Chidiac about being blown up for campaigning against Syria’s occupation of Lebanon. There’s also a profile of Amos Schocken: publisher of Israel’s Haaretz newspaper and contemporary art collector, plus a whole section on urban planning, which is like mind porn for a geek like me.

ages ago, I asked for someone in London to read the Creative Review for me. Well, I finally got to read it myself and boy is it a corker: it largely centres around the Tate and Tate Media, it’s inhouse comms department, headed by Will Gompertz. There are several articles – a diary of Will’s day, which is enlightening, but also quite sweet – discussions with awesome designer James Goggin and interviews with Fallon, who have worked hard with Tate on the strategy of turning the Tate into what it is today. Their great Create Your Own Collection ads for Tate are Fallon UK at their most brilliant. [Will talks about the strength of Fallon and their strategy, which is encouraging, as Fallon UK have taken a major hit in my opinion of them lately, thanks to their desperate TVC turnout.]

There’s also features on how they work with artists to develop the communications for their shows and also how they work with designers: emerging and established to accurately convey what a blockbuster is about. It also covers the joys and perils of working with that Tate logotype created by Wolff Ollins – design blockbuster himself, and also the more intense ways in which a gallery like that is communicating to the huge variety of people it does.

From an artist’s perspective, it’s a great feature: a behind-the-scenes look into the world’s most well-known contemporary artspace. From a comms person in the arts sector, it’s brilliant. As pathetic as it is, it’s so satisfying to read that the head of Tate Media – an organisation with an overall budget probably 1000 times mine, never has enough time to do all the cool things he’d like to do either and has to make it through the minefield of creative vs strategy. As a bonus, the Fischli/Weiss manifesto is printed up nice and large on the back, which is surely the artworker’s 10 commandments.

*magnation is so rad – they have a great pile of discounted mags and a few weeks ago I was able to grab monocle and creative review for $20. what a deal! 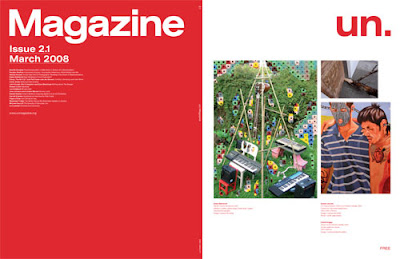 it’s the first one in aaaages. it’s great. it’s so lovely to have it back. there are a few great articles: my favourite being Daniel Palmer’s guide to making a speech. i haven’t read much more of it than that, ‘cos i just found where i put it after the launch, but i’m looking forward to digging in deeper.

how could you not love this mag? i can never manage to buy it each week, but once a month seems to be my rotation. i picked up no. 298, which focused on the gap year – that year between high school and uni (mine ended up being a gap apprenticeship of 5 years!), with a great article on working overseas: ich bin eine gastarbeiterin. other highlights include helen razer (the woman rocks, i don’t care what anybody says!) and mic looby, fiona scott-norman on drinking culture in australia, an interesting snapshop on polination control, plus the beautiful Beirut (Zach Condon) interveiw. bliss. i bought it from the vendor (on the corner of elizabeth and bourke) – i didn’t catch his name, but he had a beautiful smile.

february’s issue is only just hitting the streets here, but I’m glad I was able to pick it up: liam gillick on the cover – he’s just brilliant and I loved hearing about him “re-gifting” half the space of his mid-career’retrospective’ back to the organisations to see what they’d do with it. plus there was a great interview with the grumbly smokey Belgian “saviour of painting”: luc tuymans.

another highlight: review of Will Self’s Psychogeography, which I’ve been going on about for a while (which is on its way from amazon as we speak) and reflects the early stages of some investigation into psychogeography that I wanna do. [edit: check this stuff out happening in sydney].

I know I posted about art world last time I did this, but can I just say again how fucking great it is to have a good art mag in this country? it’s sold out of magnation twice now. thankfully I can pick it up at work… featuring Rachael Whiteread: hello? hello!