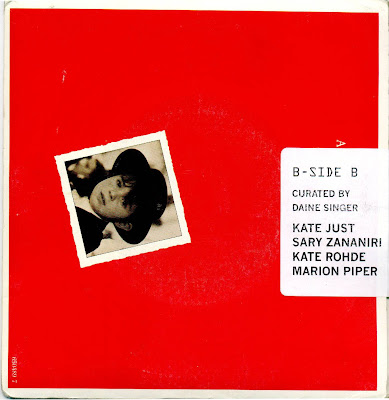 this may end up being a regular part of my blog – i’m going to try and write this once a week, so that if the shows are still on, you can check ’em out and form your own opinions 🙂

Blindside, BSide B
BSide B is a regular thing at Blindside and it’s a fantastic premise for a group show. The artists get to exhibit work that is slightly outside their usual ‘thing’, perhaps experimental work, or just stuff that you have to get out of your system – a B-Side (or rarity)

This year’s crew include a who’s who of cool Melbourne artists: Kate Just, Kate Rohde, Sary Zaniniri and Marion Pope. I love previous work of the first 3 and i now love work by Marion Piper, based on her awesome t-shirt shouting video. It shows a woman carting around town a soap box (milkcrate) around town and getting up on it to shoutout a slogan from pedestrian’s t-shirts, as though she were a living breathing performative t-shirt herself. It was great to see the pedestrians reactions, considering that we don’t really balk at someone non-verbally ‘shouting’ out such slogans at us. The catalogue was actually one of the coolest i’ve ever seen – 7″ rekkids, with the catalogue insides for $3:

Sutton Gallery Project Space, My Baggage Ain’t That Heavy
I went along to support great photographer and friend Izabela Pluta, plus I got to see a couple of other great Sydney artists, including the infamous Ms and Mr and Kate Murphy (both of whom did great works featuring childhood performance). The space is a project space for Sutton Gallery and this exhibition was put on by Shelley at Sutton. I loved the space and the simple, yet powerful show – it’s great when commercial galleries have the space and/or the inclination to give themselves some breathing room to curate artists whose work is new, or perhaps a little ‘out there’, without having to be so driven by sales. I’m looking forward to seeing what else is on at this space.

The Arts Centre, Nick Cave exhibition
I haven’t seen the whole show, but from the bits and pieces that I have seen, it’s a bloody fantastic show and takes up the exhibition space, plus parts of the Smorgon Family Plaza downstairs. It features a swag of personal memorabilia, interactive sound works, artworks by Nick and of Nick – including a Howard Arkley sketch (not the famous coloured image) and a great series by Jenny Watson of Nick and the Bad Seeds [I think], although he was very young, so it may even be Nick and the Boys Next Door. Even if you’re not a huge fan of the poetic prince of bass tones, the show is really quite engaging and I certainly had a sense of pride about having him as a national icon – I wonder what the poor chaplain at Wangaratta Cathedral Choir has to say about that!

WestspaceA4
Thanks to some mandatory training, I had to miss out on going to this opening tonight, but I will be popping in there to check out the A4 Art show on the weekend, which is the only time this show is open. As the gallery’s major fundraiser, there are some specky artists showing their works there and surely a bargain to be had.