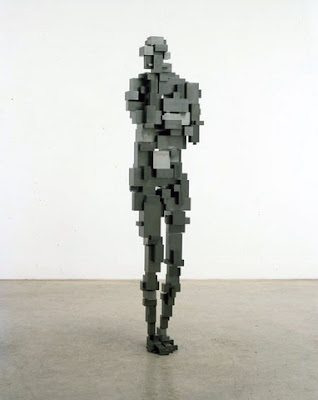 I’ve only seen a few shows this week and everything is winding down, but there are still a few gems to be had, especially along the flinders lane strip:

anna schwarz gallery – antony gormley, ataxia
the man is famed for being a prick to work with and many friends have a love-hate relationship to his work (especially in London, where the man is everywhere), but I still really like his work. And this work is a great melding of two previous works I had seen: Allotment and his figures that scared the bejeesus out of Londoners earlier this year. He combines the architectonic works he has done, with the figure to create pixelate figurative sculptures that somehow remind me of work by Sue Webster and Tim Noble. It’s interesting to notice that the figures take on a more anthropomorphic shape in one’s peripheral vision, which added another ‘element’ to the show and the concept for me. The inevitable relationship between the blocks of form and pixels isn’t detrimental in this show and if you wanted to read into the works a commentary on the digitization of humanity, you could. Otherwise, you could simply enjoy the strength, repetition and structural loveliness of the figures and imagine them in the corner of the living room.

arc one – summer show
the summer show is a lovely way to check out the feel and scope of the commercial galleries as they wind down for the summer break. it also gives you an interesting survey of what some of australia’s contemporary artists are up to at the moment. and arc’s stable of artists, mostly painters, is a good solid showing.
while most gallery goers would go ga-ga (how’s the for alliteration!) over janet lawrence’s work, I actually really liked david ralph’s paintings of caravans, campers and tents within an interior space. lyndel brown charles green’s work is intricate and engaging, but not really my thing (I like a little bit less ‘particularity’ about my painting technique). over all, a nice, solid show.

NGV – joseph beuys and rudolph steiner, imagination, inspiration, intuition
i love joseph beuys. having never really experienced much of his conceptual installation before hitting Europe, I’m a late arrival to the beuys fanclub, but I’m now a firm fan. so I was really excited to see this show here, in Melbourne and with an interesting premise – a correlation between the artist and the theosopher. the reality of the show was that I was actually really, really disappointed. I had hoped to see loads of joseph beuys pieces, or at least a couple of really huge works. not so – a felt suit, one of his ‘inspiration’ boxes and a set of his oxidized metal boxes. not a brown painting, felt roll, lump of coal or even a sketchbook in sight! there were loads of steiner blackboard sketches [kind of interesting, but at the same time, some of them made the guy look kookier than l. ron hubbard] and a tenuous link with beuys’ pile of blackboards (which were totally crowded in that space), but neither aspect of the exhibition seemed to actually inform or entertain, despite enormous potential to do so. thankfully it’s not a paying exhibition.

craft Victoria – fresh!
December is graduate time, and fresh is a survey of the best of recent graduates across the craft/art and design fields. I love seeing student craft/design works – they seem to have less, I don’t know, green-ness about them than the photo/painter/graphic design crew do. and there’s a sense of abandon that I love, that hasn’t been quashed by the realisation that production processes and longevity are actually major factors in designing a piece.
the map on the wall of the space is actually really cool and a great way to give you an idea of who’s showing and how they fit in, and the huge supermarket-style installation is impressive!