I didn’t really get to many galleries this week. I’ve spent quite a bit of time working at European electro-trash gigs and getting some Christmas stuff done. plus, it’s all winding up in Melbourne town.

However, I did go to the McCelland Gallery in Langwarrin to see the biennial Sculpture Survey. They had both indoor installations/sculptures, outdoor sculpture and a student ceramic prize (where I saw an artwork that looked scarily like my red eggshell works!! it was weird seeing work that so closely resembled mine). It’s a bit ranty this week. 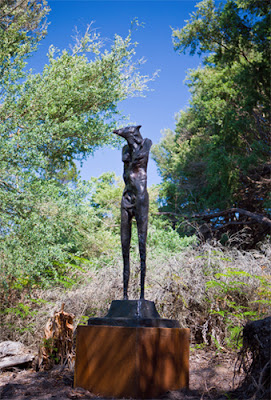 Rick Amor, Relic, 2006Winner of the 07 Survey prize.
congrats to Mr Amor and image thanks to the McClelland gallery website.

Now, I actually quite like the McClelland gallery and prize. The dosh is quite a chunk of money [$100,000 thank you very much]. And I think it gives large sculpture a place outside the city of Melbourne and the opportunity to work in a natural but not-so-usual environment. The surrounds are amazing and it gives artists a different task than either white-walled rooms, or busy, bustling streets.

And in my opinion, some of the sculptures just don’t use that opportunity. The best sculptures actually capitalised on the open areas, the Australian bush landscape, the slightly spooky nature of a path through the land. And not to diss Rick Amor as an artist (he is an amazing painter), but the winning work was not one of those works. In fact both years I’ve seen the Survey, I’ve thought that the winning work was uninteresting, unresponsive and, well, cheap (on ideas and audience engagement). And weirdly there seems to be a running animal theme – last year’s winner was Lisa Roet’s Chimp Head and this year’s winner was a jackyl/human morph figure. Amor’s work is good sculpture. You can tell it’s by an accomplished artist/craftsman and would look quite amazing much larger, atop a lonely hill somewhere. But that’s not where it was and it’s not what it was, so it was a bit, well, meh. Perhaps the prize is chosen from a series of documentary photos like the gorgeous one above, taken on a glorious day.

[And I go on about that stuff because, while I believe certain elements of sculpture can be assessed and judged on merits outside of its environment, being a spacial medium, a large aspect of outdoor sculpture, especially set like this in a particular setting, is the consideration of the surrounding space.]

Some of the sculptures that I really liked, that I thought worked well included Urban Real by Gary Deirmenjian, a chunk of metropolitan ‘greenery’ – pavement, a bin, a No Standing sign and a plane tree – all dumped into a section of the bush;

The pan-type figure by William Eicholtz, which was glazed, like porcelain, added a beautiful Watteau-type enchantment to the collection. “Impossible Cornucopia presents…” had the right amount of whimsy and slight spook, plus it was technically well-made. It might not have been the coolest ‘style’ nor the best title, but I actually thought it was well done.

Same with the kinetic works of Laura Woodward, which were simple, spidery looking automatons triggered by sensors, but in hanging them from the trees, they were an effective experiential work [and made the right kinds of scraping eery noises too.]

Briele Hansen’s Sink, the running tap and porcelain sink sculpture was great – especially in the middle of the bush, in the middle of a drought and I had to resist hard the urge to turn the tap off. While I appreciated the digital imagery within the work, I actually was slightly disappointed by its presence and just wanted the running tap/sink. But then that’s the kind of humour I like in my sculpture. 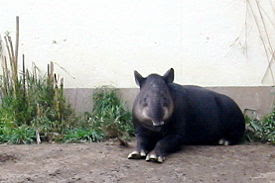 In terms of more trad sculpture, Belgian artist, Koen Wastijn made a baby tapir-looking-thing in bronze, which was well-placed on dried scrub, in a section just off the path, looking like you’d stumbled into a nesting area. Well-curated there.

And then indoors, the best works were Richard Giblett’s Container World. I liked the large dystopia, but I thought the smaller container work was fantastic. As was the over-sized waterbottle that showed a moving image of the sea through its top (I didn’t get the name of the artist though, dammit). Glenn Clarke’s folded currency Laotian landscape was also great, as a consistent, meaningful work.

I know that some of you Melbournians might be afraid of the trek, but it’s well worth it to visit the gallery – it’s on about 15 hectares of land and there is an amazing permanent collection too, tracking the history of Australian sculpture. Open over summer, it’s a nice place for a picnic and some spatial consideration.

I’m going to try and see some gallery stuff over Christmas – go to some of the big state institutions: NGV Ian Potter, ACMI and the State Library, but if I don’t post about it next week, I’m sure you’ll cope.