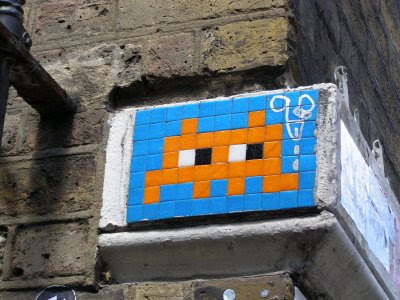 mr gower, my urban-art-lovin’-partner-in-crime, sent me this article by wooster’s marc schiller. i replied to him with a huge rant about it and then realised that i should probably post my rant here, not in his ear.

So, go on, read the article, ‘cos i’m going to rant about it and it won’t make sense otherwise.

Firstly, this kind of dynamic has happened with art since the renaissance – it’s called a ‘movement’ – you have the superstars who get all the commissions and then the sub-standards who get a lot of the backwash by people who either can’t afford the real deal, or who are hoping that they’ll become big name and they can cash in on it. Greed has been a feature of art for that long… Hmmm.

The other thing that pisses me off about this kind of discussion is the adherence to ‘unique is good/copy is bad’… I thought we’d been through post-modernism. I thought we already established that there is nothing original – ads are ripping off artists all the time and making a packet from it, what’s wrong with artists doing the same? Not that I condone mindless money-whoring, but if there is nothing original and there are a group of people doing the same thing, together – stop pitching each other against one another. If you’re all not as good as one another, change that – collaborations, collectives, politicise, etc.

And although Schiller seems to be cynical of Steve Lazarides’ (of Lazarides’ Gallery) business practices (perhaps rightly so, i don’t really know), he does thankfully acknowledge that he a) sells a lot and b) pitches the market at the market ie: holds events in warehouses, run-down spaces, uses blogs and online media, as opposed to the trad ad contexts for contemporary (and pricey) art: art forum, frieze, galleries in piccadilly and chelsea.

As someone who has had an interest in street-based work for a long time, the shark-like market of this ‘scene’ disturbs me. But it’s the same thing that disturbs me about other visual art forms (like the nouveau-naive) and the music industry and other commodified creative industries. The problem, i believe, isn’t street art, or even just gallerist like Lazarides, it’s the whole fucking thing. Greed is part of human nature and digs its dirty little fingers in the most vulnerable of places.

UPDATE: if you’ve come here from businessweek looking for a blog that talks about “Street painting art business discusses how street painting is being applied by companies to present their messages with a traditional 16th century art form in a 21st century environment. Perfect for public relations, marketing, and advertising campaigns, many companies have used street painting in product launches…” … you’ve got the wrong sinatra. go home parasite.