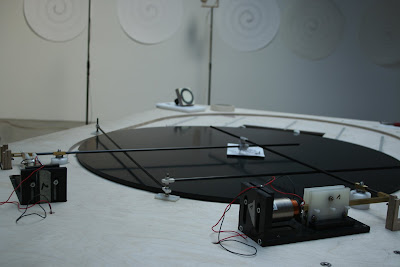 i don’t know if this happens to anyone else, but you’re going along, brewing on ideas, letting them simmer, then BANG!! you read/see/hear/trip over a whole stack of stuff that’s about the same thing – all at the same time!

then, last week i went to the architecture + philosophy talk at fed square, where dr michael fowler was discussing his teimu project of mapping a space via its sound. and in fact, the influence on soundscapes in japanese landscaping (specific or what!). he had a bunch of info graphics that plotted an area based on the sound of the place and referenced john cage’s score work relating to zen gardens.

and then? dude, olafur eliasson has a blog. and on there i read about his new work, spatial vibration. eliasson was a legend before. now, he’s wearing underpants on the outside and featuring in the superest. superhero dude. what’s mine say? sweet. 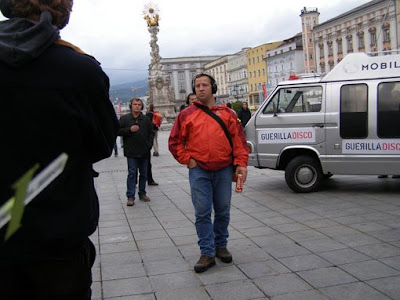 sound, as the ultimate structural system (notes, pitch, waves, harmonics and pure mathematics all being very clear architecture), makes an absolutely perfect match for spatial practice. sound will fill a large space far easier than a whole bunch of tactile work will, and can elicit memory and atmosphere far better than a shitty video will. [and i like the visual image of sound filling a space – like some kind of erwin wurm piece, or violet beauregard in charlie and the chocolate factory.] interestingly enough, there’s something about private sound that i’m also interested in – the role of headphones and all-encompassing sound that provides a private space and ‘your own world’, like in the guerilla disco work at linz.

perhaps i shouldn’t have dropped out of my science degree after all.