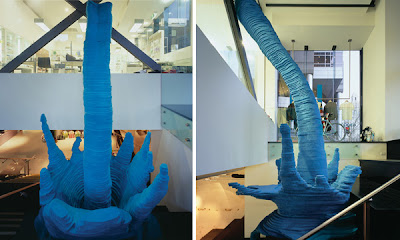 ok, so despite every intention of getting to dorkbot and pecha kucha in the last couple of months, i finally made it to an informal presentation night, a là pecha kucha and interesting! woo hoo!

and thanks to arkatekcha‘s tip-off, it was process at loop bar in meyer’s place [between bourke and little collins] on monday night. unlike the speedy gonzales taste-test of the afformentioned socialinfo things, this one was just two designerish types who spoke for about 20 minutes each. that’s it. with some time for beer and skittles in between.

if i’m brutally honest, soren luckins‘ piece was more informative, well-illustrated and clearer than martin bird‘s, but i enjoyed being challenged by his boundary-pushing and found them both utterly engaging talks to listen to. especially because the focus for the evening was multidisciplinary practice, which floats my boat to no end.

it’s all about coming up with a creative solution, specific to a client, no matter the media. and in terms of a studio practice, it’s a focus on collaboration and sharing of expertise. which, as an artist, i’m always excited by (although i hear that architects aren’t always so..)

like at interesting, i scribbled away at my notebook. and in it i found a couple of points which i kept jumping out at me:

• the tree form (including beanstalk) kept appearing in büro north’s stuff and i found that incredibly interesting. when asked, soren was pleased to hear it, but it wasn’t intentional. i’ll be interested to see if that comes up in the next creative meeting.. ha!

• it’s more about seduction than production. the reality of spacial design practice seems to be more about the art of seduction than anything else (at least up until a certain point in your growth) with those early years spent mostly developing a way to chat up a client into realising a project. all using sumptuous textures, beautiful rendering, clear planning and a shit-hot presentation.

all that thoughtful goodness, coupled with rob’s hassling me, has inspired me to get drawing and doing stuff again (not to mention the looming deadline of a may exhibition). more on that later.