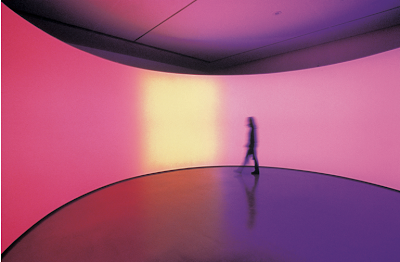 i just got back from a roaring trip to sydney and brisbane. sucking in as much art catch-up as i possibly could in two days for each city. easier said than done.

olafur eliasson at the MCA was a massive drawcard and, thanks to sydney’s terrible public transport, and my awful time management skills in the face of such chaos, i didn’t get to the gallery until friday morning.

funnily enough, it was exactly the kind of exhibition i expected it to be. usually i like surprises in my blockbusters, but there was something extraordinarily comforting about this sense of familiarity. 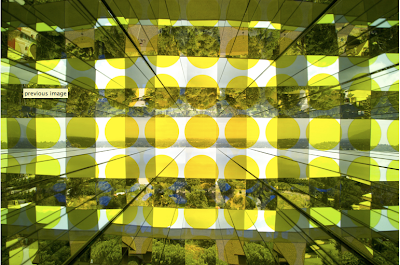 the mirrored window extension as you first walk in, with its tunnel of one thousand reflections, was perfect for the vista over circular quay and his spectral mirrored architectonic passageway into some of the main galleries was just beautiful. that colour reflective acrylic is an amazing material that seems to be made for OE and his light/colour spectrum schtick.

on either side of the entranceway were two moving light-based works, both reminiscent of film history (especially hitchcock) – one created spaces using the angles of 7 massive quartz light cans and the other used the combination of filter and refraction to create a revolving light/colour installation.

i have seen the lego room before, so didn’t participate, but i wasn’t surprised to see it filled with teenage boys, building their koolhaasian architectural monuments to the phallus. it was so cliche, that it took the glee out of it for me. although i was pleased to see the one asian boy building a great wall-esque extension – going for span rather than height. interesting ethnographic studies in that room abound!

bracketing the lego room were two spaces that investigated pure colour and light. the circular reflection cylinder was dreamy – on a slow time-loop which graded the colour from one end of the spectrum to the other, slowly moving through from violet to red and every shade in between. as i overheard, at no time, were you ever a witness to a single pure colour – always moving from one to the next. 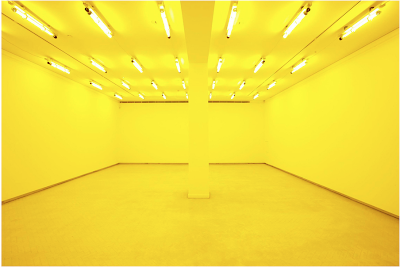 the other colour-light room was all pure colour. yellow (which, strangely, is the single colour i have always associated with OE. probably because of his sun work, but maybe even before that..). whilst loads of visitors were all freaked out by the purple compensation sensation, i enjoyed the strangely flattened depth of field. it was beautiful to just watch the human form in an altered palette – all nostalgic and dreamlike. i could have actually stayed in that room for a really long time, but sadly i had time constraints.

tracking back through the gallery, past the entrance to the southern wing i flicked past the photos of geological colour samples. i kind of found it boring, although it certainly put his practice in to context. and i went straight into the model and print room, where i fell in love with his 3-part colour wheel/palette prints. they were embossed and layed over each other so that the colours were in a wheel, created by an overlapping triptych of prints – with a perfect triangle of space in the middle. oookkkaayyy, so it does sound pretty simple, but my colour/shape/math geek self went a little weak at the knees.

which was backed up by the part of the show that made me go quite silly with love. i call it the tessellation station.

the first room was lined with his moss wall. by this stage of the show, it was whitey-yellow, all the chlorophyl having been drained out of it. in fact, it reminded me of how the great barrier reef is going to look in the not-too-distant-future, will all the coral being bleached out of existence by the lack of ozone. 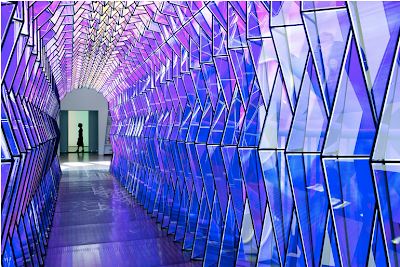 in that room was the coolest kaleidescope object – aluminium cones joined together to create a myriad of facets and reflections that produced such simple, but beautiful shapes of reflections. these were visible either through being inside the space and looking out through the cones, or from the outside, looking into the cones. even the structure itself, with its quasi-industrial connections and materials. and, at the same time, the whole thing reminded me of something out of Dragonball Z. or something like that.

the final space was the water-room, which was preceeded by an earthenware brick corridor, floor to ceiling, which modulated temperature, insulated the space and acoustically deadened it. although most treated it as an interstitial space, i loved that in and of itself.

anyway, the OE show is fantastic. i was a little concerned that the show might end up being an extension of ego and i would end up hating mr eliasson, or at least feel slimey afterwards. not so – its timbre is so perfectly weighted that i could go back again and again and again.

image credits: all pinched from the mca site.