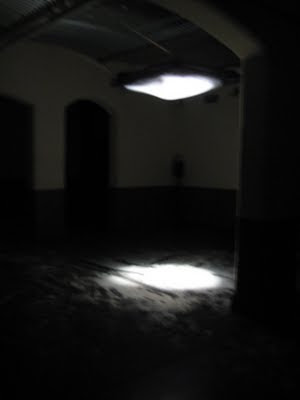 before i left for newcastle, i made a point of cramming in a bunch of melbourne fringe shows to see, including a work by sarah duyshart, lure of echo.

this one i liked. a lot. it’s at donkey wheel, which used to be called the melbourne wine society, in the underground cellar space. the only other time i have seen this particular space was as the venue for the rockin’ wedding reception of dear friends. and believe me, this work has utterly transformed the space – which is what i love in an installation piece. especially one that focuses on a highly aural sensory experience.

the work absolutely echoes – both acoustically through the space, and visually – the image of the sand on the floor and above it provide a sharp visual feedback loop, which doesn’t smack you in the face with a thousand references, but perfectly accompanies the glitch soundtrack.

the darkness of the space (which i’m hoping was intentional and not just me being super early on a saturday morning) was spooky, comforting and a well-employed mask, allowing the artwork to reveal what needed to be revealed. nothing worse than a space showing your petticoat 🙂

i recently heard that repetition is the mark of repression, and given the multiple archways, the loop of soundtrack and the obvious feedback echo repeating in that acoustic environment, the choice of an underground – recessed, if not strictly repressed- architectural context was perfect too.
plus, you know that whole schtick about melbourne being the city of the hidden discovery, well, it resonates here too.

great show and nice use of a space. you should go check it out before the festival ends. check out the deets here.