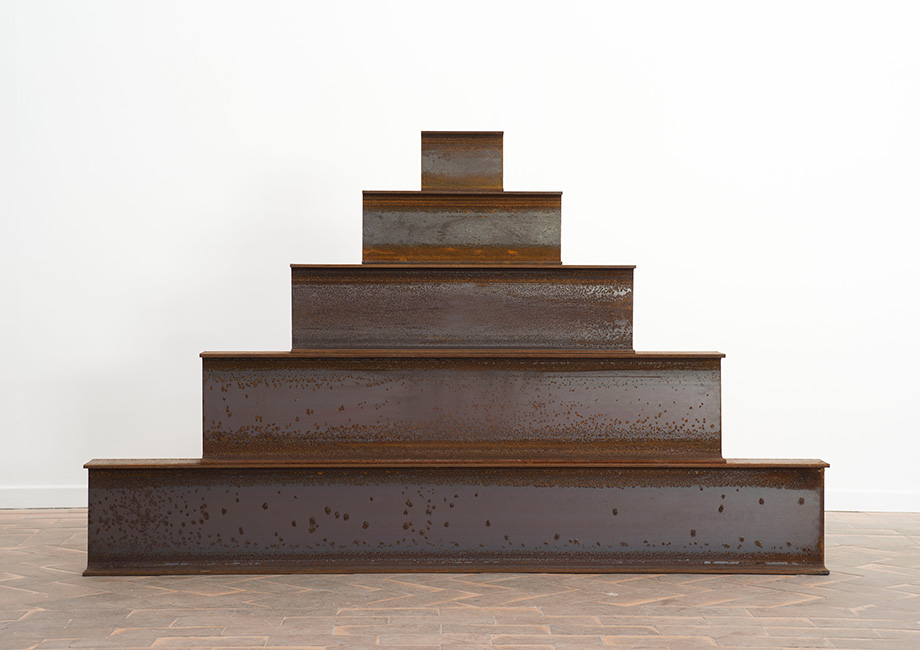 Sitdowncomedian, and I took ourselves to the Martin Creed show at the Hayward gallery. We were both struggling a little, heavy hearts for different reasons, but found it a perfect antidote.

It was the first time I’ve seen the breadth and the depth of Martin Creed’s practice*.

Until this point, it’s only ever been catalogues, a few displays in group exhibitions/biennales/etc and a ramshackle live performance at Goldsmiths. I think the man is pretty great, I just didn’t realise how much until this show.
The thing about this show is that you just have to see it. You don’t even need to know anything more about it than that.
Which renders this post a little superfluous. However, I will do my best to write something about it, so that you can make a point of seeing it.
Succinctly, it’s a show about ascendence (and descendence).
In as many ways you can possibly think of.
The curators at the Hayward have done a shit-hot job of taking you on a journey along that simple-but-profound-idea and it is immensely satisfying.
It is also the busiest show I’ve seen in a while, because of the frenetic and prolific nature of his work.
Yet  because of the size and the purity of his investigations, it’s not cluttered or overstated. Which feels an odd thing to say about a show that repeatedly speaks about the same thing over and over and over again.
Because he comes at it from a variety of angles, it is clear and pure – crystalline.

A diamond says the same thing about carbon over and over again and is brilliant and dazzling, without being bloated or overstated.
This show is like that.
Yes, I know, I just compared Martin Creed’s show to a diamond.
Perhaps I am guilty of overstating.
Anyway, without giving too much of the show away, you can look forward to highs and lows, ups and downs in a gorgeous cascade of variety, including:
Colour spectrums (ascending light/colour)
Musical scales (ascending and descending) on the piano – played by the security staff
Towers of boxes (ascending space)
Towers of other objects (ascending form and line)
Phallic cacti getting bigger/smaller (natural order)
Cocks doing the same
A newly erected wall (it’s all about getting it up)
Even the ramp was blocked off (for clear reasons to do with safety) and you had to climb up and down those stairs.
Up and down, up and down, again and again and again.

It sounds like a Doctor Seuss book in visual form.
Perhaps it’s exactly like that – filled with direct poetry, profound ideas and joy joy joy for the hell of it.

A couple of nice and fitting diversions from the theme include the massive swinging MOTHERS sign. It didn’t wow me that much the second time around, but it is a crowd-pleaser.
The funny film of a dog and a couple of people tracking back and forth across the screen. It could be arbitrary, but it seemed to be triggered by people crossing the space, which I liked. And a cool trick with a car doing something similar;
The wall of tape – which was sort of like a colour spectrum, but more linear and ridiculous. Nipples and arseholes/nautical installations and objects, which were lovely (although not quite as lovely as Sue Webster and Tim Noble when they do similar things);

And a special mention to The Balloon Room. Although I was in no state to really plunge into that fit of joy on that day, by all accounts it was pretty exciting, if not a bit claustrophobic (like the Gormley White Light room). It is an installation that finely balanced childlike and simple joy, with opportunity for deep anxiety. That takes a certain skill.

The great wall of broccoli prints did something similar, although rather than anxiety, it produced a clear fantasy about being Martin Creed’s Broccoli Assistant:

(at a party)
“Oh, nice to meet you, what do you do”
“I work for Martin Creed, I’m his Broccoli Assistant”
with the business card:

See? The exhibition takes you to some absurd places, without being obtusely, or disrespectfully ironic (everyone knows how much I hate irony as the core of an artwork). And because it is so generous, it also leaves plenty of room to dislike works without feeling left out or hating the whole show.

If you want a flourish for the well-rounded experience at the Hayward, pop across the way and head into the Royal Festival Hall, to the Singing Lift. It features his permanent ascending/descending sound work, which overlooks a different perspectve of the balloon room.

In fact, this added exterior perspective of the show was great and not something I had seen in many shows at the Hayward. It was a reflection of an exhibition which concerned itself with entirety.

From the outside ‘car park’, you could see the image of the two dogs on the side of the opposite building, and from exterior balcony, you looked towards the towers of The Shed and the Tate Modern – which had similar forms to those seen instide. (I did have a little wish that the tower of the Tate Modern had been painted in a colour spectrum by him, so it would tie all in nicely across that southern bank.)

Anyway, you should go and see the show.  I’m going back for seconds soon.


*I always call him by his full name Martin Creed. Just Creed or just Martin seems weird to me.

Image: pinched from the martin creed site itself.