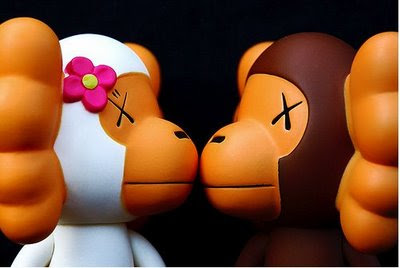 following on from the kids and the psychoanalyst, here’s a story about love from age and his blog, in my atmosphere. on his blog he discribes himself as ” wannabe sneakerfreaker, wannabe music producer, film maker, skater, street wear aficionado, mixtape DJ, screenwriter, baller, blues guitarist with jazz influences, cultural commentator, cultural contributor, but right now, I’m a strategic planner for an ad agency.” but he’s also a straight-up romantic:

There’s a guy I work with, a really nice guy who was originally born in India. Playing on our email work server one day he typed in his surname and hit Ctrl+K. What this does is search our entire global network for matching names. To his surprise, his surname came up with 2 matches… his own, and a girl from our New York office. Working in Account Manglement he was looking to procrastinate a bit so he decided to drop this girl a random hello email from Oz.

Turns out that this girl grew up in the same area of Mumbai as he did (in fact, surnames in India are usually an indicator of where you grew up, not so much which family you belong to). They continued to exchange emails, and a little more, and a little more… A few months ago after planning a trip to India to visit relatives, she decided she too would also take time off work to visit family in India. Of course, they could finally meet face to face! Catching up with him on his return to work a month or so later, he divulged this entire story to me as a well kept secret going on for many months – and of course I kept his word but loved asking him “how’s your sister?”

The other day we were in a meeting room discussing a brief. Still, procrastinating, we began discussing the status of his relationship. He told me that he had resigned from the agency and would be leaving in a few weeks. Whoa. I was amazed. I automatically assumed that he would be relocating to New York to hook up with his sister… ok, his girlfriend. His throat got kinda dry as he explained not. See, he had only recently been diagnosed with a serious kidney disease. And the situation was not great. Knowing his condition, his family had requested he fly back to India immediately so they could send him to a renowned Kidney specialist who was also a close family friend. They wanted him close and he needed them close. Love. I was genuinely saddened to hear this news. I asked what that meant for his relationship – because I knew that it was one of the best, and most important things in his life right now. Now his eyes were watery. He told me that he had spoken to her on the phone and explained his condition and his plans to fly home. The next day, she had quit her job at the agency too and booked a ticket to be there when he arrived – for how ever long she needed to be with him she would.

What’s love? I don’t know but I reckon that’s pretty damn fucking close. It’s more than the little things… it’s when it’s everything.