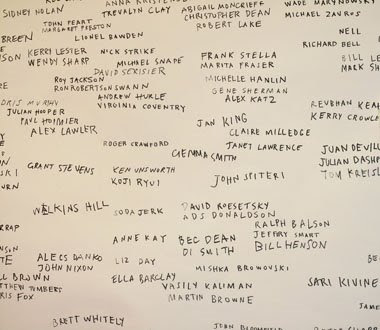 on friday evening i went to ACCA to watch agatha gothe-snape‘s performance every artist remembered. this one was in partnership with domenico de clario and was actually really entertaining for an art history nerd and list-maker like me.

i didn’t arrive until about 6:45, but stayed for 45 minutes, playing along at home – making my own connections between the artists remembered by agatha and domenic. and only once did the same artist come up: from The Quote Generator to Jenny Holzer.

this makes me a total sad-fuck, but i think i’m gonna go to as many of these performances as i actually can. i learned some things – heard about some new artists and enjoyed the slight randomness of grace crowley and pelé being on the same page.

jobs warehouse was closed when i went to pick up some fabric, so naturally i popped upstairs to check out what was on at sarah scout: kate daw‘s show in between days

this show was mostly about fabric motifs and the symbols in furnishings that just recede into the background so quickly (a bit like sounds of everyday life, yeah).

one work that i was intrigued by was a typed list of names – apparently fabric titles and flower names. it was very beautiful and reminded me of what i’ve been trying to make with my lists of sounds.

kate from the gallery showed me a few others of kate daw’s typed lists or exerpts – on fabric, with an industrial sewing machine. i loved them immediately. they’re mostly found type, but have the form that i like in text on fabric: slightly warped, considered and with the weight of literature (as opposed to a slogan, or marketing brand). 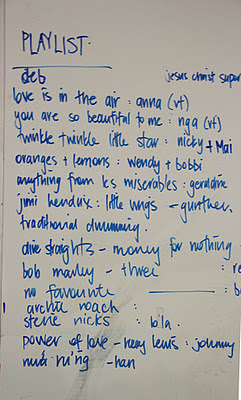 one of the projects i’m doing as part of the aura residency is asking people what their favourite songs are. i’m making a playlist and it will end up being a mixtape/CD thing that i’ll give to anyone who wants it.

the list is starting to look pretty ace, and i’ve starting writing some of the songs up on the blackboards outside towers on 253 and 229 hoddle st.

i’ve also decided to make the playlist another formal object. so far, it’s just blue whiteboard marker on a whiteboard. but i’m going to make it neater and more ordered, so that it’s pleasing to look at and something that can be moved around a bit – maybe even hung up on walls somewhere in the block.