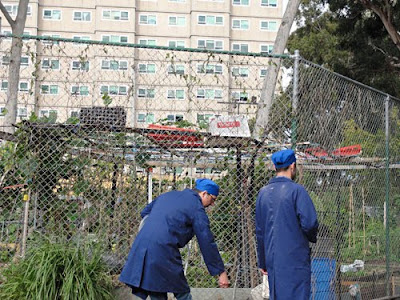 serendipity is funny, innit. about 3 weeks ago, i don’t think i really had ever heard of jorges luis borges. or at least i didn’t take much notice.

but then ben and craig, as part of their fabulous residency, recently did a recital of his essay around the grounds of the collingwood housing estate and it was ace.

[in fact their post about their first 6 weeks is excellent and although i’d seen most of it in the making, i was proud and jealous and excited all at once]

then i meet benjamin forster, who is one of the other residents at cia. he’s super smart, super motivated, he get’s it. and he’s got a show at fremantle arts centre, which i went and checked out late last week. apart from being amazing manifestation of actions about time and language, he referenced mr borges in his catalogue essay and in a work about the removal of meaning!

i took a friend along, who still believes art is about images and striking images at that. unsurprisingly, my friend didn’t quite get it. but after our post-exhibition post-mortem, he understood (which is the subject of another post, by the way).

as slight sidestep about the other works at the centre: olga cironis‘ show, fajr, about prayer rugs and the significance of their aesthetic on islamic ritual was pretty interesting, but could have knitted in a little extra punchiness with something else – perhaps the sound of fajr call to prayer, or some vision of fajr prayers. i don’t know exactly, i just felt that there was a vital piece of information or meaning that was slightly missing. i did, however, find that i felt a great sense of relief about seeing an artwork on ritual in islam, in a place that is so not-islamic, like perth. perhaps i’m just being a romantic orientalist.


sadly, i felt no connection to the patrick doherty work. it’s probably just not my thing.

obviously, i need to go and borrow a copy of something by jorges luis borges (or, in australian strine: geooorge boooorgs).  refutation of time? exactitude in science?

for you perth folk reading – you need to go and see benjamin’s show at fremantle arts centre.

for you melbourne folk reading – you have to keep an eye out for open studios at the underground. or at least on the blog. there’s some interesting stuff goin’ down there.