the last two days of isea have been jam-packed. i’m kind of glad that i need to leave on friday night, because i suspect after more late nights tonight and tomorrow night, i’m going to need an early night in very soon.

a large chunk of yesterday was punctuated with problem-solving to do with my iphone, so i missed a bunch of excellent sessions and the rest of the electronics workshop. however, i did get to the session i had most wanted to get to – sonic strategies. 4 speakers all talking about interaction with sound, audification, sonification, mapping and the gesture of listening/playing. rachel o’dwyer from ireland, yolande harris based in the netherlands, shintaro miyazaki based in berlin and marc chia, currently based in spain via indonesia.

both shintaro, and yolande had listening/mapping elements to their work, which related to my listening/mapping works and marc, whilst not directly related, reminded me about the need to maintain the soul of music/sound/performance and that improvisation can help maintain that.

unfortunately i missed rachel’s actual presentation, but we had an excellent natter at the festival club afterwards – we both fawned over michael bull, bill smith and hearing/sound cultures publications.

alessandro ludovico moderated that session and after georg klein‘s fantastic ‘don’t call it art’ intervention, i was planning to see his presentation at really existing social media in the afternoon, when technology called. so many people have said how great it was – the slides were sent to the audience’s devices and they had to listen to (not watch) presentations. we also ended up having great discussion about the fanzine>blogger transfer phenomena at domicile later. 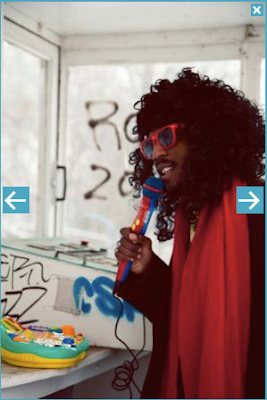 and speaking of domicile, last night i saw an unexpected, but super-awesome performance of UK performer infinite livez – think rick james vs radiohead vs beanie man vs peter gabriel. and maybe a bit of george clinton/sly stone in there. he totally played up on the black-man-soul image, but totally fucked with a stack of field-recording/relay/synth-beats stuff. so much so that there was some seriously terrible german dancing going on in the front. i fell in love a little bit.

today, whilst everyone was out and about through the ruhr region, i stayed in dortmund and wandered around the e-culture fair and the exhibitions. perfect day, actually.

i discovered that most of the e-culture labs/projects that i was interested in (and had the best conversations with) were from the netherlands/belgium. those low-landers know how to float my boat. v2, foam, dropstuff, and UP Labs – all doing great things with sound/public space/interventions/fashion or generally rockin’ stuff. the trust exhibition, on the floor above, featured a few good works, but didn’t really sweep me up to suspend my belief. joyce hinterding‘s graphite sound drawings were completely rad and the robotic camera arm work (which followed you around the room) by seiko mikami was really unnerving, but really quite beautiful. carsten nicolai‘s work was an great concept and pretty intense: a light-based hypnotic work, although the placement of a sound work nearby disarmed the complete mind-bend/altered state that the work could have been. perhaps that was intentional. unfortunately, my biggest criticism about the symposium so far has actually been about the site that is housing e-culture fair and the trust exhibition: dortmunder U-tower. it’s an amazing building, with a fantastic media facade, but it’s still really under construction: wires are still exposed, plaster dust is everywhere, floors shut off and whole sections still behind scaffold.

the only really great thing about this is that you’re sharing the lift with workmen as you go up to the exhibition – keeps us all honest in a way. but seriously, as an audience, there are enough barriers to interacting with art, let alone media/electronic art, that physical barriers and perceived spatial barriers are kind of unhelpful, really. i saw two other great exhibitions: one at MKK – full of excellent sound and interactive works. the other, agenten 2.0 a student show, which surpisingly kicked arse over some of the more ‘professional’ works. in a shopfront, it is the document of a series of interventions, actions and situations which challenge the sleepy, comfortable, gemütlich public of dortmund out of their complacency. actually, i think i will write a whole post about just these two exhibitions, so i’ll cut it short here. but if you’re reading this and you’re in dortmund over the next 2 days, go to lütge brückstraße and the MKK on hansastraße.

right now i’m off to go dancing. again. for the closing party of the e-culture fair. see you in the morning!
[which of course was written last night, but i’m fuckin’ with the time-space continuum, can’t you tell]