it’s been aaaaages since i’ve been to an exhibition and had the presence of mind to think about it enough for a review post. to be honest, i’ve been too self-absorbed in my own practice. not something i’m necessarily proud of, but just a fact of the matter.

however, i’m hoping to rectify all this with a few posts about some of the shows i’ve seen lately.

the next wave festival: closer together (which i kept calling ‘come together) has certainly provided me with the opportunity to check out some hot shows.

platform
cecilia‘s full-frontals have obviously the talk of the town (between her and the Henson fracas, holy shit!). but i actually was far more interested in her masks. they appeared like a conversation with the drawings/ceramics/glass works by Brendan Suppression (Huntley), which I kind of appreciated – both Cecilia and Brendan being Melbourne rock fiends.

the vitrine at platform, with the growing installation by was amazing. it was fantastic to see the artist* hiromi tango in the space, continuing to create works like some kind of silk worm or spider, and the aesthetic was suprisingly rad. i can get very tired, very quickly of bitsy, naive, cutesy, fluoro stuff (seeing it as a bit of a fad a the moment), but this seemed genuine and in context and considered and with some kind of depth or excitement. i liked it anyway.

*i’m sorry, i forgot to write down the artist’s name. help? 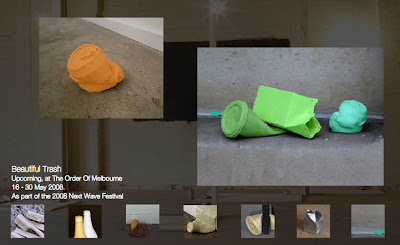 the other interesting things on in the platform subway included mel upton and her beautiful trash pieces (as seen above, pinched from her beautiful website), plus the random guerilla intervention that students from the RMIT industrial design department were doing on the opening night with rose petals. apparently it wasn’t part of the festival, but i may or may not have encouraged them to take advantage of festival time to do a whole bunch of guerilla works.

CCP projection window.
i always ride past the CCP projection window, just to check out what’s on. i made a special effort this time though. mainly because i didn’t have much time to see anything else, but also because i had seen the image of the girl pulling the red wool out of her mouth and i got all self-obsessed. i loved the idea, and i wished i’d had it – i’m currently knitting the wool that i took down from the Spinach residency and i kind of wished that i was making a movie of pulling it out of my mouth instead. the video is so beautiful and so simple.

[i think i’m going to upload the short vid i took of that red, thread process to flickr. then i might actually do something with it.]

Anyway, I managed to scurry down to the Meat Market on the last day of the festival and wow. Firstly, the place is amazing. not quite as cool as the london meat markets that look like these, but are still working slaughter galleries. Secondly, the installation is impressive. It’s actually nice to see impressive artwork [in terms of scale] in australia at the moment ‘cos i haven’t seen any for a while. the work itself is also impressively beautiful – loads of colour and dramatic composition, opportunities to engage, or to just stand back and observe. the last work i had seen of keating‘s was the great stack of mXs at platform a few years ago (having missed out on the acca debacle. shame bout that) and from that, this is amazing. his comment on beauty and waste is interesting and relevant, if a little ‘no shit sherlock’, but still a message that needs to be repeated again and again. i find the argument about permission of waste the interesting bit (especially in light of said debacle) and the point at which waste is no longer owned, if ever.

there was a forum on when i went and unfortunately i couldn’t hear a damn thing anyone was saying, which was annoying, as i would have liked to. a lot. so i scarpered off early.

this is now, sebastian moody
on my way out from the meat market, i popped in to see this work which used advertising/planning methodology to create an image to represent the values of current australian society. knowing a little about the whole ad/planning wank (see previous post), i was really interested in this work and wanted to find out more about the artist, what else he found, whether the research papers he tabled were legit, etc, etc. in fact, i wanted a whole bunch of my plannery types to check out the show, but hey, most of them are on the other side of the world (ahem). [age, stan, angela, angus. if you read this and need to remind some of your creatives about the difference between art and advertising, go see this show.]

Objects in Space
I have the awesome OIS catalogue. so there. 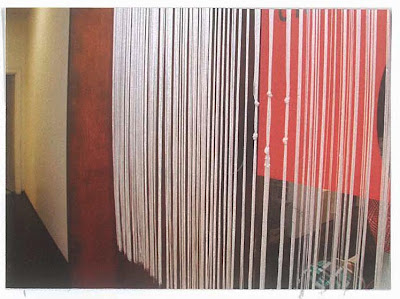 i’m tempted to leave my review at that. but i should just quickly point out some of the cool things i’ve seen as part of this project: renee ugazio‘s curtain piece at craft victoria: very xanadu, abba, 70s interior design. i thought i’d hate it. turns out i like it rather a lot;
the schlock horror install by yvette king on the stairs of bus: fake mice with flashing red eyes, b-grade screams and tacky mist. all brilliant and a perfect entrance to the fabulous, fabulous show by Kim Jaeger & Emelie Plunkett, Jordan Wood and Bonnie Lane;
oh, and the mel upton piece i mentioned earlier. plus, over the last couple of days i’ve been able to check out the show at TCB featuring Alasdair McLuckie and Christina Hayes (that’s her work above, that i pinched from the tcb site).
Alisdair’s show seems like the love child between Jade Pegler and Dylan Martorell, two of my fave peeps, so i don’t know if I was especially partial to his work. Not that it’s bad, but I just know that style rather well and am surrounded by it at the moment, so a little over it. Christina’s paintings are quite lovely. I only really truly liked two of them and for some reason, it was the two which had this really beautiful shadow colouring between the body and the tree they were in. it really grounded the figures and made them far more engaging. but overall a good show at tcb – they always do killer shows there. 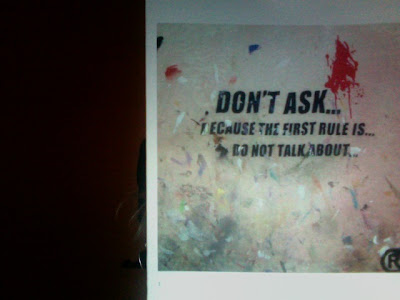 and i also got to see great shows at west space, especially hockey plot – fantastic show in the main gallery. i especially liked the punk’d t-shirt exchange and the sharp wit of both rehgan de mather and simon perecich killed me. i laughed out loud. a lot. which can be quite embarrassing in an empty gallery. but hey. the image above is a dodgy shot from my photobooth of the catalogue, featuring rehgan’s tee.

so, this weekend i’m also going to check out neon parc, kings[woo hoo! new website!] and hopefully both the damiano bertolli and louise weaver shows at the geelong regional gallery. well, that’s the plan anyway.

oh, and i also went to the brilliant architecture + philosphy lecture at RMIT on friday night, featuring ashley schafer from praxis, but i’ll post about that separately on monday, after i’ve seen part 2, with tony fry (everybody’s in the house!).