my dear friend dunja rmandic co-curated her first exhibition and it opened on thursday night at counihan gallery in brunswick. it features a series of artists, who common thread is their focus on deception, distortion and the bending of truth. mostly contemporary works, although there was a fascinating display of painted lightbulbs from finland, where the custom is to throw them off the cliff as the first rays of spring sun arrive over the edge.

other works i enjoyed included the photographic essay by marita lillie on consent and permission – timely, considering the current intense discussion about consent in australian photography happening in the dailies and art mags. [edit: the art life have launched the ultimate ‘statement‘ about art, sexuality and censorship’ over on their blog]. i loved the photo of the four afro-carribean girls sitting on a fence, all with whistles around their necks. it was obviously at the notting hill carnival and it reminded me of the fantastic time I had there last year. It also reminded me about all the underlying tension and difficulties that get raised during that festival – both from a socio-political level and an urban/navigaton level.

i loved the slightly-obvious-but-still-amusing neonthis is not a sign by kiron robinson, which was hanging in a cabinet dividing the space. and the jon orth banana skins stapled to the wall spelling aposthetic were beautiful. in fact there’s a great pic [on facebook] of the curators and jeff kahn, who opened the exhibition, standing in front of it. cute.

hidden away in its own room was a role reversal, the sound installation by mutstumi nozaki of life in reverse. it was quite good, although not something i felt like listening to, but more to have around.

interestingly, the work which was the feature image on the press, maria stolnik‘s Untitled, 2007 of a woman with a mask across her face, actually looked better in the gallery than it did as a stand-alone image. the actual masks were displayed, with photographs of them being ‘used’ or performed with in-situ and these made the whole context for the work change and become a whole lot clearer.

the catalogue is ace. i love a free catalogue with a show – especially ‘cos it helps me write a blog post about it, but also gives me time to read the context and let it sink in.

all in all a great show and totally worth the hellish trip up there in the freezing-cold wind. 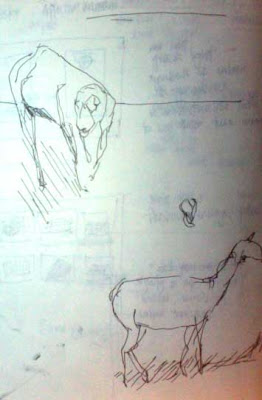 i hadn’t been to kings in a while, so i popped in there on saturday afternoon for a quick peek at their current show, which opened on friday. it’s fantastic! a great mix of media, styles and all clear, concise and top-notch. originally my interest was piqued when i read about tim webster’s show (having a current obsession with all things urbanism), but i’m so glad i got to see the rest of the works too.

darn thorn’s wallpaper works are beautiful, cinematic and haunting works that remind me a little of twin peaks, a little of lost and quite a bit of izabela pluta’s wallpapers. that front gallery at kings is the perfect space for them and the lighting was amazing – just single spots which corresponded to the spot lighting of the works. noice.

natalie ryan made some very creepy looking figures from black material (didn’t catch exactly what, but it looks like valour). the installation is a diorama of black ground, black figures and as such becomes completely about something else. the forms become purely formalist, the objects become metaphors or codes for who knows what and the whole piece becomes about mystery. it’s great. and lovely to draw too.

tim’s work was not as grand as i thought it was going to be, but i still really got a lot out of it. two video/moving works: both of urban indicators – one more literally than the other. red light green light was alternating red/green traffic lights over two screens, like an urban rhythm, or dance. the indicators piece was a grid of 6 flashing orangey-yellow indicators of different shapes and patterns. i realised how much the shapes of these things tell a lot about the car: the age, the brand, the model, all which can give clues into the people driving the vehicles. these codes are especially urban, only really noticed in the bumper-to-bumper-ness of traffic congestion.

and, same as before, top show – go and see it before it finishes at the end of the month.