It’s not a wild insight of mine to notice the resurgence of neon/fluorescent colours at the moment. I think you’d have to be colour blind or wearing blinkers to not pick up on the bright fashion, the nails, the accessories, Doc Marten shoes, web-graphics and printed posters all in bright bright colours.
It’s that 80s recycled thing again and on one hand it makes me crave the odd socks i used to wear: one neon yellow, the other neon pink, carefully rolled down to my white espadrils with short jersey shorts. On the other hand it has me pondering exactly what the significance of this resurgence might be.
If it was just an 80s redux in fashion thing, I probably wouldn’t take too much notice. But the point that sent my analytical mind into a bit of a spin has been the use of neon/fluorescent colours in Art. Capital A.
There was a show in Melbourne recently that featured 5 or 6 artists who use fluorescence in their work (that didn’t include  some of the others i know like Dell Stewart and Anita Cummins, for example).
So i thought maybe it was just an Australian thing, until a few weeks ago, i walk into  the Christian Nagel Galerie in Berlin, a fancy pants commercial establishment. The large abstract expressionist paintings by Stefan Müller all had significant elements of fluorescent in them. And not in a graphic ‘kapow!’ pop kind of way either. But in a subtle, abstract, touchy feely kind of way. 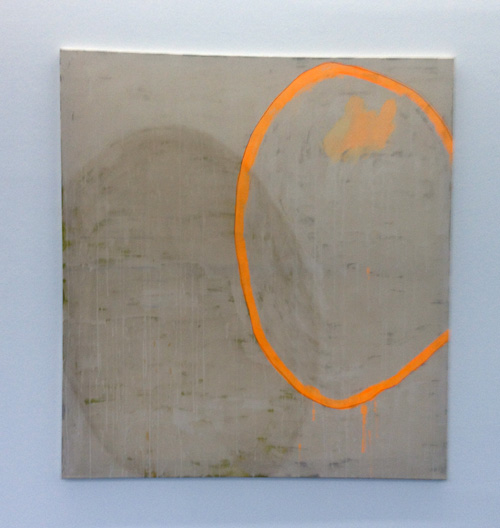 Of course, it could be just an artist riding on an aesthetic trend for commercial gain, but I kind of doubt it. Especially not at the kind of price point these paintings sell at.
I might suggest that financial crisis might be linked, if the fluoro bombs from the 80s weren’t before the 1987 wall street crash.
It could be a reaction to neo-conservatism: ‘hey! look! there’s other, useless and fun stuff in the world, not just boring elitism and econonomic rationalism’, but the US is currently floating a supposedly progressive system, as is Australia and France (although admittedly only just), Germany is, well, technically not progressive, but comparitively is.
I can’t find anything formally written about the theoretical significance of fluoresence in art and a few google searches link to either art galleries that are under blacklight, or connect to the link between fluorescent spores in bacteria (careful when you include the word ‘culture’ in your keywords, kids).
The first wave of fluoro fashion was probably also a boast at new technological advancement: pigment developments –  ink and dye techniques that could be used in plastics and fabric so they almost glowed. But this recent wave isn’t about boasting or flexing innovative muscle – they’ve been available for 20 years or so.
In biology, fluorescence (or bioluminescence) is used to attract mate or prey, and perhaps this is an explanation, as a result of tightening belts (prey) or declining populations in rich western countries (mate). Now i really think i’m reading too much into it.
**If anyone reading this has anything properly insightful to add, or a reference I obviously should have read,