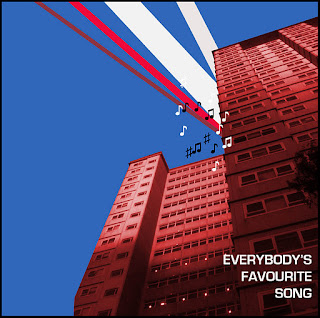 when i first arrived on the estate as the artist-in-resident, i was trying to find other ways to observe sound on the estate (as well as the listening works). in the first week, i went into the neighbourhood house for a meeting – possibly a CHEAC meeting, and i observed deb, a resident, come in, make a beeline for the stereo, put a CD on, go directly to track 17 and listen intently. she didn’t have her ears pressed to the speaker, but she was intensely focused on the song, as though she had dived out of the present moment and into whatever meaning that song held for her.

i wrote that down on the whiteboard in the studio, as well as the name of a CD i had found lying around, thinking that i was going to start collecting sounds in an ambient way. sounds that i ‘happened upon’.

somewhere along the way i realised that others probably had similar experiences to particular songs – one’s that they carried with them. and that was a particular phenomena of listening and sound in public housing. so i started asking people what their favourite song was, and writing it down.

ages ago, niko and i had talked about the device of The Playlist as a means of empowering people – an abstract form of choice that people could move around, customise and personalise. I didn’t actually think i would end up making a playlist, but that’s what happened.

unsurprisingly, it was a great device for talking to residents about music, listening, what i was doing and who they were. just personal enough to expose a little bit of ourselves, but not so much that i would be intruding or interfering in delicate dynamics or defense mechanisms.

as i wrote here, children and teenagers were the most in touch with their favourite songs. they knew, as though their lives depended on it. perhaps your favourite song is currency in the school yard – like if you like justin bieber, i’ll talk to you, but if you like beyoncé, i’ll only play with you once. i don’t know – i just came up with that then.

A&R peeps for justin bieber, beyoncé, taio cruz, usher, eminem, LMFAO and gym class heroes will all be pleased to know that their biggest fans are 8 – 12 year olds in poor areas. i’m guessing that’s exactly who they’re pitched at (except beyonce – she rocks my socks too and jackie, 12 and i were friends for an afternoon because of it).

older residents were also quite in touch with their favourite song – like all the likes/dislikes over the years had decanted, leaving that one song that just stuck through. the beatles, simon and garfunkel, lynard skynard.

obviously there were a few “i dunno”s and a lot of “ooh, aah, ummm”, but most people could think of something – at least a band or musician that they liked. the vietnamese on the block loved traditional asian melodies and soft, sweet sounds. and the aboriginal crew loved archie roach and bob marley. more than once i got ‘took the children away’ stuck in my head.

and above all else, people loved love songs.

day after day, i wrote up one song of the day on the blackboards,  i made sure that i chose a love song if i could.  love me do, i love you like a love song, everything i do, i do it for you, greatest love of all, when i fall in love, i want you back.

here’s the final playlist, pretty much in chronological order. i made CDs and handed them out to peeps from the listening booth. i left some at the neighbourhood centre and i will be making a new batch of full sets in the next few weeks.