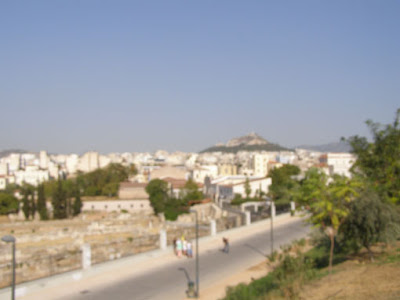 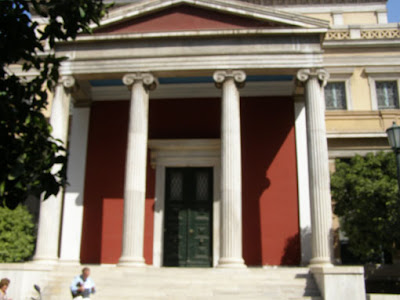 The main reason I came to Athens was to check out their first international Biennale. I also wish I had made more time to go to the islands and to check out other stuff, but unfortunately, that’s part of the traveling experience.

Part of my own, povvo version of the art festival Grand Tour 07 [The main ‘Grand Tour’ this year has been Munster, Basel, Dokumenta and Venice, but mine has been Sydney, Sharjah, Ars Electronica, Venice, Athens and probably Lyon next week.], the Athens Biennale has actually been quite a highlight.

Unlike the themes of other Biennials (Ars doesn’t quite count), this one, Destroy Athens, was an incredibly strong concept, looking at the overpowering weight of the classics and the archaeology on Greece and Athens in particular. And it is site-specific, which, rather than being limiting, served to bring together a really powerful group of artworks and also managed to convey much more of a universal message than, the broader themes of, say, ‘Zones of Contact’. The curators, XYZ, can be proud of their effort.

The works went through several stages of thematic grouping, which were signified by Days 1-6, a little weird, but the actual grouping of them was great: 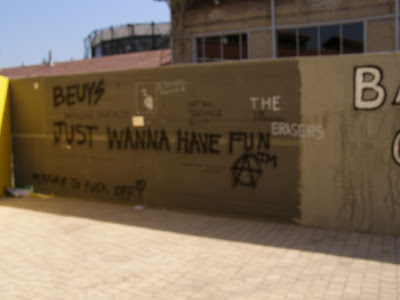 Day 1
After the first video work Destination Deutschland, showing the destruction of 5 German bridges, the first ‘day’ was work by a range of culture jammers/activist groups including voidnetwork, the erasers and adbusters. While this area could have been mind-blowingly powerful, it lacked incredibly on execution that the message was just lost in a sense of half-arsed mess, which I was really disappointed about (especially because this is an area of art that I’m particularly interested in). The adbusters fly-posting was falling off walls, and if it was intentional, wasn’t done with enough precision to make that understandable. The posters should really have been 12-bill overpowering images to really get the message home about the force of advertising’s contribution to the destruction of culture. Same with The Erasers work – if they intended to erase work, like the ‘removed poster’ on the wall, they needed to make that a hell of a lot clearer AND to also make work outside the grounds of the compound to add to the effect (if they in fact did that somewhere and I missed it, apologies). The voidnetwork video work relating to the overload of information and the strain that the earth and cities are under from mass consumption was actually quite good (and Athens should know about mass consumption, especially of cultural product), but a little let down by the rest of it.

Day 2
This ‘stage’ featured a group of artists whose work spoke specifically on the weight of Athens architectural/sculptural history and the myth of that architecture/sculpture and history.

It featured video works and wall text by the Obolith Group and wall text which included great quotes like “For 200 years of more, the Greeks have been turned by us into a kind of angelic race” by John Winkler.

Greek artist, Ioannis Savvidis showed architectural/planning technical drawings reflecting the intense sprawl of Athens over 50 years, plus plans to alter public [fascist] monuments, plans to develop new kinds of tourism centered around an F1 track and what that really means for Athens and whether it has the true capabilities to handle the flux of a transient population.

Olaf Breunig’s video Rodakis was a documentary about an historical greek man, Rodakis, and the details of his life and the building of this house. The poignant twist at the end of the film is that, in fact, there are no details about Rodakis, or his life, that all the information was from a ‘reading’ done in 2001 from the abandoned house, which begs the question about ‘history’ and what aspects are truth and what is just supposition, conjecture and cirumstance from bits and pieces – an educated guess?

And, at the end of this large stage of over 20 artists, was a small crayon drawing by Pablo Picasso of the Parthenon, reducing it to yet another image of the greek ruins.

Day 3
The artists in this section of the Techonopolis mostly had work regarding the body which was introduced by another brilliantly hilarious video by Olaf Breuning of a tourist looking for an ‘authentic’ tourist experience, tracking the ‘locals’ in their native environment and then drugging them and stealing their costumes – given my recent experience of being a tourist and hanging out with fellow tourists on a daily basis, this was bang-on.
Robert Gober’s well-known ‘bodybag’ – a half male/half female wax sculpture- was part of the this stage, along with video works by Kajsa Dalhberg and Lotte Konow Lund, as well as a great ‘tunnel’ by Georgia Sagri, featuring nothing except people supposing about the meaning of the work and then leading the view pretty much straight back out again – again playing on the desire to having a culturally ‘rich’ experience even in an empty tunnel. 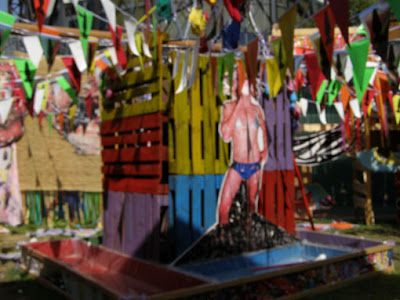 Day 4
This section was what I termed the ‘mashed’ section – starting with a real mash-up work of fluoro, collage, busy, intense paper and material covering a manufactured playground type area – and then proceeding into.. 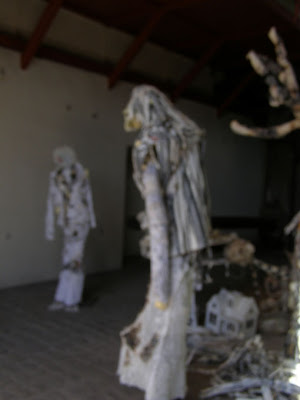 Day 5
This section was within a heavily industrial area of the venue and contained the sinister and obvious ‘destruction’ works, starting with works by Aidas Bareikis and Kimberly Clark – replicating dead bodies and rubbish dumps, with an intense heavy metal soundtrack in the background somewhere, and also included drawings of genocide and massacre, and the remnants of a performance where ceramics were dropped and broken in piles (looking similar to Pol Pot’s Killing Fields), both by by Terence Koh.

Day 6
Perhaps as a reflection or salve after the intensity of the previous stage’s destruction works, the final section of the main Biennale pavilion had work that dealt with salvation./religion – including a fantastic series of 588 paintings of a glass half full/empty. The highlight of this section, and in fact of the whole pavilion, was the prisoner’s inventions, collated by Angelo and Temporary Services. Perhaps because I had been thinking about the resourcefulness of those in captivity or with limited resources (like when you’re living out of a backpack), but this really appealed to my sense of ‘innovation’. There were artist brushes, cigarette lighters, radios and pencil cases (made from colgate toothpaste boxes) – brilliant.

And then, to put an absolute dampener on the whole amazingly uplifting and thought-provoking show, the final image of the show was a video of a dead/dying lamb, floating in a river – the lamb of god. I wanted to fucking vomit.

However, the work and curation of the show was amazing. Being the inaugural festival, there are a few things, of course, that should be improved for next time – signage really, really needs to be improved. They had some quite prominent bills near the venue, but once you got nearer, there was no indication about where to buy tickets and the staff were putting up ad-hoc arrows to lead you around the exhibition on the day I was there – a full 10 days after it opened [am I always whinging about signage?! Perhaps I should become a signwriter or ‘signage consultant’! ha!].

Chatting with Ioda (I hope I’ve spelt her name correctly) from the container bookstore was one of the highlights of the exhibition and having a nice place to sit and chat with others about the work afterwards could be improved, especially because there’s a lot to process. The catalogue was pretty good (although the black&white images, I’m hoping, will be upscaled to colour next time), and perhaps more free information about the artists – even the title of the works and where they’re from – would be helpful.

That may sound like a big long whinge, but really, I was greatly impressed with the exhibition – the theme and the responses to it were fucking brilliant and I’ll try to see what Athenians and other Greeks think of it in the next little while. It will be interesting to see what happens to Athens in the next little while and where it positions itself on the European and world cultural/metropolitan stage as a result of this festival. 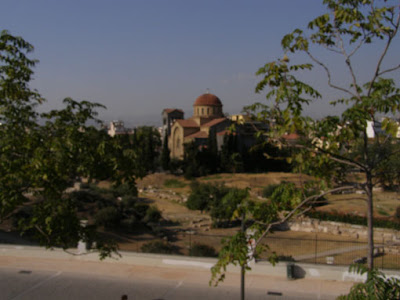 My time in Athens itself, outside of the the Biennale was the least immersed in the culture, which felt a little weird and almost hypocritical. I didn’t learn any of the language (apart from please and thankyou), I went to Starbucks everyday, I hung out with Australians, Kiwis and Brits and ended up staying around the tourist area, which felt so, so wrong. And the whole time, I could feel the weight of the mountains and the temples peering over us in the valley.

I did go to the Acropolis, but only at night, when it was lit up so majestically and I had my first intense feeling of being just a speck of dust. I got a real sense of what it must have felt like hundreds/thousands of years ago, looking up at that temple and truly believing that it was the realm of the gods. 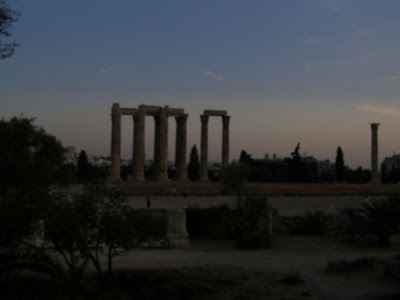 The other main thing i got while in Athens was bloody homesickness – the weather was so lovely and warm and the terrain reminded me so, so much of parts of Australia (especially around Perth and Adelaide), that my body just developed a craving for the pacific ocean and to be honest I’m kind of glad to be home in less that 6 weeks. If any Australians are still reading, could you organise for Summer to be in full swing around the 1st of November? That would be super!