Yesterday was the final day of the CERES site-specific project and over the week, I’ve managed to produced 3 works. No huge works, but certainly focused works.

I wanted to do a range of smaller pieces, that responded to the site in different ways and expanded my experience of the place and of working in a permissible space. 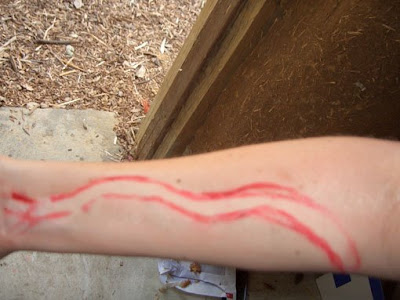 The first work, the one which I wrote about here, Burn, didn’t have the outcome I expected, which is I guess is an occupational hazard of doing body works, but it was a process that was definitely successful.

On the second day of trying to get the imprint of the Merri Creek in my arm, some interesting aspects of the process happened. In criss-crossing the site with my arm outstretched into the sun, it was like my arm, and the creek were mapping the site, almost in a psychogeographical way. I got some interesting reactions to the sight of an exposed arm, with red texta and sunscreen slathered up it (which looked like a major cut or burn in itself). Some teenage schoolboys just stopped and stared, god bless em; the women from the market gardens asked me what was happening and nodded with interest and/or puzzlement. And Tim from the café, who had been making my coffees thought I had slashed myself. But was interested in the idea after I told him about what was really going on. In fact he called it my creek ‘tattoo’, which I thought was helpful insight. 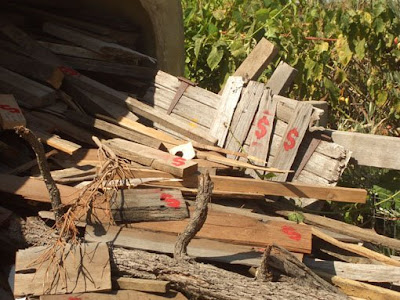 Stock was a very quick-response work: stenciled $ symbols on an existing woodpile. This was the more pointed political work (let’s face it, anytime you use a monetary symbol, it’s political, right?): creating a ‘stockpile’, a pile of valuable material – valuable in terms of cut wood, the natural material as a valuable resource and something to think about in terms of burning ‘money’. 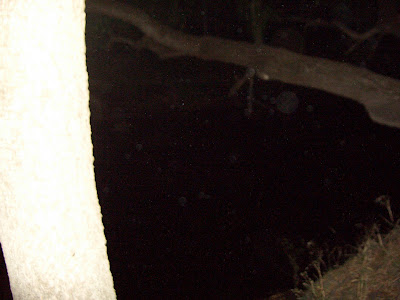 After years of wanting to do a work with LED throwies, I knew that I was going to end up doing a light work here. Being a nature-based urban space, the magnetic aspect of the throwie wasn’t going to happen, but I’ve adapted it to the space and finances that I had access to. Initially set for the new nursery section, I was hoping for a veritable swarm of lights [I bought 100 LEDs!] But I couldn’t find an affordable option for that many 3V batteries, so I ended up having to downscale and re-work slightly.

The work is currently hanging out over the merri creek, near the fence to CERES and resembles a small buzz of fireflies, who are the natural model for efficient lighting. In-situ, at night, the works also seem to plot a space of sorts – like points on a 3 dimensional plan-of-sorts.

Unfortunately, the camera I have just wasn’t able to pick up the subtlety of the image, so all I have is that blackness you can see (which shows up how dirty my screen really is). Hopefully I’ll have some imagery from another student next week. If not, another documentation bites the dust. Dammit.

I’m having a holiday for a few days. Time to sleep, eat, sleep, watch tv, sleep. I’ll be back on board next week sometime.