i’d heard about this happening, but i think i’ve officially overdosed on exhibitions. for a while.

or more to the point, i’ve overdosed on openings. for a while. i’ve been to 4 of the fuckers in the last 2 days, have my own happening tomorrow night and quite frankly i’ve had it up to here with them.

this ridiculous gallery hopping began on wednesday night with the Peloton openings: Material Culture by Rowan Conroy at P19 and the group show Examples at P25 featuring a wide range of contemporary artists: Daniel Argyle, Hany Armanious, Lesley Dumbrell, Matthys Gerber, Alison McGregor, Anna Kristensen and Giles Ryder. The shows were OK – although they left me feeling a little flat, especially the group show. Not that it wasn’t absolutely packed with great work – it was. Most of it was extrememly professional and well-crafted/well-thought out, but i left just feeling a little bland. This may actually have more to do with the layout of the space, more than anything. Everything was laid out fairly evenly, 2D work on or attached from the walls, sculptures in the middle, enough space to walk around – i know, just how you want it when you go to a show. but for some reason, i wanted more. i wanted something that i could get sucked into. or spat out by. Rowan Conroy’s work was not the most intriguing photography i’ve ever seen, with work investigating industrial and urban architecture (which i quite enjoy most of the time) but because the whole gallery was taken up by all of his works and there was a sense of theme encompassing the show, i actually enjoyed this more than the who’s who show at number 25.

last night i squeezed 3 openings in on the one night and i think they pretty much encompassed the gamut of shows/spaces in sydney in one foul swoop.

firstly i headed to the quagmire of paddington for the last show for the year at Roslyn Oxley 9. If i thought the Peloton opening was a who’s who, then Stolen Ritual at rosox proved far more so. the list of artists included James Angus, Hany Armanious, Angela Brennan, Tony Clark, Destiny Deacon, John Firth-Smith, Fiona Hall, Christopher Hanrahan, Newell Harry (the guy with the last name first, and the first name last), Lindy Lee, David Noonan, Rohan Wealleans and John Wolseley. phew!

Some of the art featured was kinda predictable. Not the art itself, but the presentation of it – glaringly aimed at hefty wallets looking for a wonderful christmas gift for dear aunt lady so-an-so. As a balance to the big hitters like Firth-Smith and Wolseley, there were some great works which were by some of the coolest kids on the block at the moment. I really enjoyed both James Angus’ works: Soccer Ball Dropped from 35,000 Feet and Pi to One Million Decimal Places; David Noonan’s screen print on birch plywood was beatiful and it looked like a portrait of Brandon Lee all made up like The Crow, but i could be disasterously wrong there. I had a good chuckle at Newell Harry’s Mum and Dad/Dum and Mad drawings as well as the usual giggle at Christopher Hanrahan’s work – this time he was cracking out the Jewish proverbs: As is the Gardener, Such is the Garden – (soul man) being more concise and generally amusing then the (table lamp).

And despite all that great work, i had the worst time! If someone ever sees me at a Roslyn Oxley opening ever again, could they tell me to go home and come back another day, when there are only the gallery staff around!! The ubiquitous mafia of the über cool are always at the openings and i invariably leave feeling like the biggest dickhead on the planet. I stutter my words, have no idea what to say, feel like a bit of a lost lamb and in trying to make up for being completely intimidated, make stupid remarks filled with bravado that have me looking like the biggest ignorant wanker on the face of this planet. well, maybe ol’ johnny ‘oward would give me a run for my money, but anyway. the weird and the worst thing is, it’s not the rich-looking patrons, or the stylish artists that have been around forever that i lose it around – it’s the around-my-age-but-more-successful-than-i-am-but hope-to-be types: usually male, usually drunk, and usually brats that i end up in a mess around. and that’s what i fucking hate about openings – i swore that i would never go to an opening caring about who i was or wasn’t and would just dig the art. yeah, well, in theory. 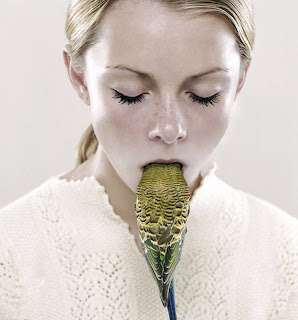 so, back to punching my weight, i popped into the ACP opening of the Pet Project, which was yet another feel of opening. A lot more women and quite a nice easy-going atmosphere. Not so much preening and more actual conversation going on. I didn’t get a chance to see all the photos, thanks to there being so many people, but the new space was ace, there were some great photos of pets. To be honest, my favourite one was the front cover of the new Photophile – an image by Petrina Hicks, but I also really liked the cibachrome lightboxes featuring ‘missing pets’ – ornaments from shops in chinatown and the work by Beverley Veasey. I caught up with Izabela, which was great and after a juice, i left just as Sandy Edwards from Stills Gallery walked in with the largest, most beautiful dogs you’ve ever seen. Obviously to get her pic taken at the Pet Photo Booth by Justin Spiers and Yvonne Doherty. Obviously. 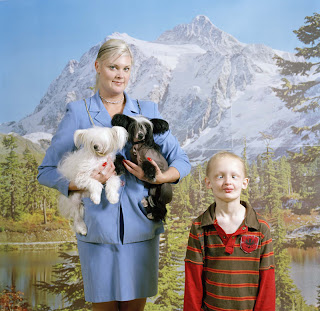 Justin Spiers and Yvonne Doherty, Andrea, Tristan, Valentino and Tatiana thanks to www.acp.au.com

And then to the other end of the spectrum: an ARI opening. medium rare‘s last show for the year, 21st Century Dreamtime. Jo Cuzzi and Rachael Lafferty are showing paintings with a slightly carnivalesque theme. I’m not sure whether it was intentional, but the crowd kind of reflected it too – lots of obvious art students (now on holidays), crazy costumes, hair styles and lounging around the odd-shaped space. Although the space felt a tonne more comfortable than either Rosox or ACP, unfortunately the work wasn’t all that fab. I liked 2 paintings which were on quilted material, looking like they had been painted on children’s changing tables, or matress protectors. Other than that, the works were quite all over the place, like Juan Davila minus the craft. Pity really. 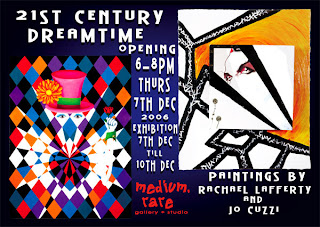 And if you’re not exhausted by this account already, then you should be, ‘cos i was stuffed after all that traipsing. I was also incredibly intrigued at the pattern i discovered: the better the work, the more uncomfortable the gallery space is. which doesn’t do much for making work accessible. but i guess you don’t want art work to be too accessible. people might actually enjoy it, talk about it, want to have it, but not actually buy it. PR101: the more out of reach something appears to be, the more people actually want it and the more people will pay for it.

and finishing on that incredibly jaded note, now i’m going into hibernation. i’m not going to go to another art show to see others’ work until i get to brisbane. i’ve had enough. i’m about ready to just stare at a blank wall for a while and sip some kind of cool drink and overdose on food instead of visual ephemera.