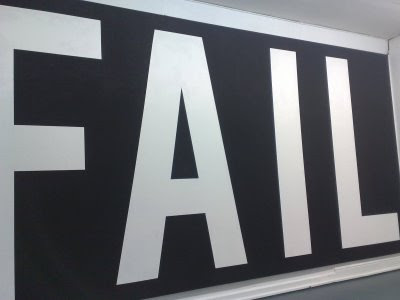 I’ve been to see a few shows recently and have stumbled upon some recurring themes: white text on black wall; and feminism.

The white text on black wall is really just on the block of Gertrude street that contains Seventh Gallery and Gertrude St Contemporary Artspace.

There’s a series of shows at seventh at the moment that are fantastic and predominantly text based. The first thing you see when you walk into the space is an epic FAIL. As in, a huge F-A-I-L in white on a black wall. Awesome. And then in the back room, it’s spectacularly ordinary: white neon ‘ordinary’ in a black room, by Kristin McIver.

Between the wordplay is also a beautiful project piece that is playing with magnetic force and light, creating a trajectory between a magnet on a rotating motor/crank with LED – a picture of attraction and repulsion. It’s simple, delicate and beautiful.

Then, across the road, the front gallery at Gertrude is lit up and open to see at night (which I love!) work by Newell Harry (“The artist with the first name last and the last name first” – The Art Life), which, as well as an installation of bottles, clay pots and broken glass, is the neon sign reading THENATIVESARERESTLESS coupled with its own anagram in reflection. It’s such a striking diorama, especially in light of these other text pieces across the road.

I love that kind of synchronicity.

And to follow on from that, in the last 2 weeks, there have been 3 – count them – 3 shows about feminism in various galleries about town.

Instructional Guide to Femininity at Jenny Port Galleryis a work by my studio-mate Naomie Sunner and is a fabulous work which critiques fashion and media-based ideas of what it means to be ‘feminine’. Using costume, and more importantly, the idea of the pose, the is like a storyboard of the female gesture – rarely seen in reflected in mainstream images of ‘beautiful’ or ‘feminine’.

There was quite a bit of discussion about feminism and its ideals at the opening – a refreshing change from some of the banal conversation that can creep into such gatherings.

I got a lot out of the show – being a straight girl who very rarely subscribes to the traditional idea of ‘feminine’ and apparently challenges the idea of what it means to be straight, as a consequence. This work reminded me of a time (not all that long ago) when female fashion was all about rejecting a narrow-minded view of gender stereotypes and that blonde-long-hair-big-tits-short-skirts were a fashion faux-pas to be fucked with. Over at Kings ARI is a great work –in the form of a publication – Accidental Feminists by Victoria Bennett. This work combines a series of documentary images of incidental or ambient feminist discourse –graffiti in womens’ toilets and various groups of women together – interspersed with 3 essays about feminism in a contemporary setting by Clare Rae, Nella Themelios and Anna Knight. It is almost a curated exhibition in print form and has the perfect balance of fun, intense critical dialectic and pride in feminism as a vital social mechanism. At the opening, it was fantastic to see people sitting around, reading the publication, discussing feminism and the images/words surrounding it. I had a romantic and/or sentimental moment, imagining that this is what it means have been like in early 20th century paris, sitting around, drinking wine, discussing political theory and contributing to the shaping of society. And then the crowd got too much and I got too hungry, so had to leave. Real life, baby. Real life.
However, it’s great to see that feminism as an important topic of discussion continues to knock on the door in Melbourne.

And then…next week there’s a show at Shifted: Unfixing the Feminine with Meg Andrew, Justine Barlow, Kotoe Ishii & Jade Venus. I’m looking forward to seeing how that relates to these other two shows and to start to experience a city-wide focus on feminism. It’s great to see a resurgence of its presence in ‘output’ and I’m hoping it’s the beginning of a new round of regular discussion about the role of feminism in contemporary life.