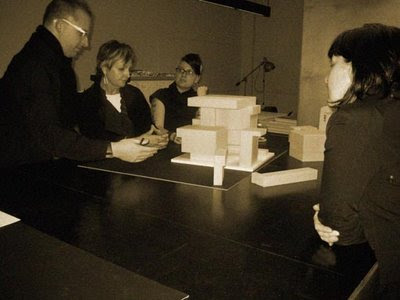 I’ve been working on one of the baking architecture projects for this year’s state of design festival*- the one between jill’s restaurant and hassell. It has actually been a fantastic merger of my many loves: sculpture, food, architecture and family. The crew at jill’s have been an extended family to me for a while, and my mum happens to be the sous chef there. So when she told me about the project, that she’d be partnered with hassell and was a little nervous, i jumped at the chance to get involved.

And, as it turns out, my skills have been quite useful. i’ve been able to translate between the lanugage of architecture and food, on both sides of the form/taste divide. And the collaboartion itself has been an amazing experience. The idea of combining both these practices is genius.

In terms of ‘practice’, there have been a surprising number of similarities (as well as some of the obvious differences). On a basic structure, they have very similar hierarchical dynamics – head chef/principal architect, sous chef/senior designer, model maker/dishpig. on this project, it has also been inspiring (and a little bit scary) to see that both of the ‘seniors’ are women and have a similar type of engagement with the project. it’s all about ideas and throwing in possibilities and thinking big.

and then you have the designer/artist/model makers reeling them in to focus on the project, discussing the practicalities, making the work, rearranging the pieces. it has been fascinating to watch unfold.

in terms of the materials, the work really does sit firmly in the middle of architecture and food. the duration of the exhibition is 10 days. which, for architecture is like the blink of an eye. for food, it’s like eternity. and so, the forms are essentially a big compromise and a stretch for both sides to think a little further afield.

the architects have been liberated by the lack of building codes and planning infrastructure durge – allowed to play with texture and colour and wobbliness and smell. [since when did you judge a building on its smell]. materials are tested with our tongues and our noses and if a bit breaks, they get to pop it in their mouth.

whereas the chefs have been focused by the intensity of the timeframe – it has been a great challenge to find foodstuffs that will last the time but still reflect a prescribed form. instead of tasting the work, to see if it works, it is about shape and image – the structure and ‘behaviour’ of food. it is about combining flavours that might ordinarily be awful, but work because, when it sets, best reflect that alcove and overhanging floorplate. or something along those lines.

from where i’ve been sitting, it has been a great project of problem solving goodness. and i have the fortune of being relatively objective in the whole process – not my building, not my ‘cake’. i get to work with some of the decorative elements, to be a studio assistant again and to work with some of the most amazingly talented creative types in Victoria.

I’m looking forward to (and a bit nervous of) seeing all the entries, which are unveiled on the Festival opening night at the AIA – Architects Institute of Australia – on the 15th July and pretty chuffed at the good times had by all.

*especially as i was supposed to have a work of my own in the festival, but had to pull out for reasons i won’t go into yet.