this week is the first of a three-week intensive for the start of my masters in public art. it’s based around a series of presentations/discussions from a variety of speakers from the industry and related fields. i thought i might subject you to some of my notes from the last few days and also keep it up for the next few weeks. especially ‘cos some of the speakers we’re having are fantastic. 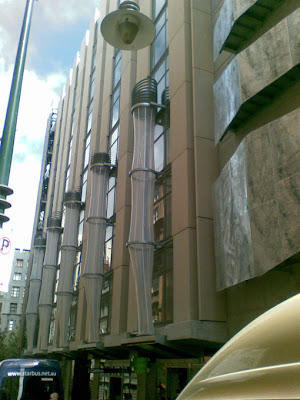 almost the worst photo of CH2 you could possibly hope for.

UK Zimbabwean architect responsible for CH2. how’s that – i post about how much i love the place two days ago and i end up chatting with the guy in a back street of carlton.

uses the animal kingdom and insect-based systems as inspiration for heating/cooling architecture, using the natural resources of the earth. also heavily influence by pre-industrial architecture from tribes and early civilisation.

book to check out: architecture without architects.

difference of opinion regarding ‘sculptural’ architecture a là gehry’s bilbao, feels that function is being squeezed out of architecture by the desire for creative expression.

found that building the eastgate development in harare didn’t get him invited back. african man wants the building that the white man has. which prompted some discussion after class about the ‘karma’ that western modern architecture has to play in promoting the idea of status and excess, which is still on the upward rise in developing nations.

floating cities – looking at developing civilisations on the water, like in holland, to respond to rising sea levels and to reduce impact on ever-reducing land. oil tanker to be used for natural pump using tidal rise and fall.

collaborated with artists from the get-go. found it vital for creating aesthetic manifestations of ideas and philosophies. they asked lateral questions ‘that engineers wouldn’t ask’. not sure if he’s all that into it as an idea – especially as i referenced ai weiwei and du meuron and he wasn’t so fussed.

drawing is still the first stage of development and was a language that architects and artists could easily communicate across. sees computerised technology as an adjunct to the design and creation process, but not the only stage. certainly not the first instance.

here’s a transcript of an interview he did on catalyst
here’s the archiplanet wiki entry
other images of the building: flickr
and the wiki on the eastgate development, harare

tomorrow i’ll do ian de gruchy, mick douglas and others.