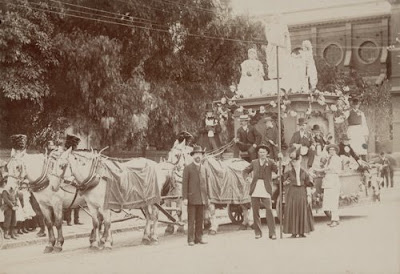 after lunch today, andrew reeves, historian and chief of staff to senator kim carr came and spoke to us about the history of public art in melbourne. he has a specific interest in the art associated with the trade union movements, which is interesting seeing as i mentioned the 888 monument here, and that it’s labour day on monday. but he spoke to us about a wide range of topics related to public art and history. 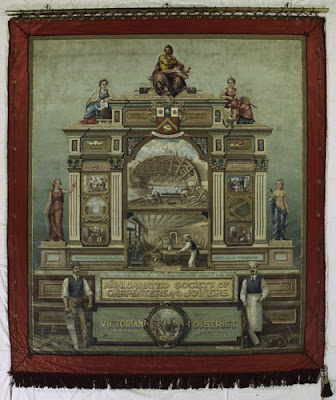 other aspects of his discussion:

• 8-hour day march banners – beautifully painted with allegorical history painting of inspiration and virtue on one side, and social realism of the breadth of the union’s trade on the other. initially in silk, but the south-easterly up collins street quickly took care of that. painted canvas: painted by union members. up in smoke.

• exhibition buildings as evidence of early public art forms in melbourne – dating from 1889. debate about the worth of the building ensued – more a puffed-out chest showing of intellect from student than relevant discussion [imho].

• liebskind’s holocaust museum extension to berlin museum: best use of building as public art ever. leads the visitor from old berlin museum (german mansion) into dark tunnel, up a significant number of steps, to the exhibits. education through an experience relative to those suffered by the jewish in concentration camps. and that’s not just because it’s a holocaust museum, as there are many holocaust museums around the world and only liebskind’s does that.

• other historical public art to check out, following the old march route from trades hall, down swanston, up collins to parliament then spring to exhibition buildings:

newspaper house, collins st – frescoes
mural paintings of geoff hogg on lygon st, north of the cemetary
t&g buliding russell and collins (old foyer)
melbourne club. kind of.
windsor hotel
pediment ofathenaeum theatre
town hall, stained glass: best example of non-religious glass in australia (as well as leonard french’s ceiling at the NGV)
drummond st: greek and roman gods, plus the portrait of zeus where you wouldn’t expect it.
parliament house
villa alba in kew – being restored in order to re-present private-ish collection to the public. a little like the wallace collection, methinks.

• museums and galleries are the prime institutions to commission and engage public art, but are lost opportunities: case in point, windswept wasteland between melbourne museum and exhibition buildings.

• public art can provide a sense of humanity to large areas dwarved or vacated by buildings “abominations”. it’s imperative in the age of intervention/extension/cover-up of architectural mistakes.

“public art survives in the most random of ways.”