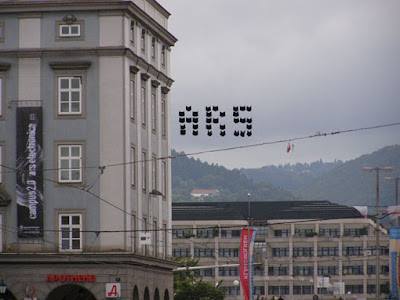 I intended to start Saturday up early, breakfasted, dressed and down at the Festival Centre at 10am sharp, ready to face the day. The reality (as opposed to the virtuality) of the situation is that I got up for breakfast (which finished at 9am!) then went back to bed for 3 hours. Finally getting up and out of the hostel, to be down at the Festival Centre at 1:30! Crap!
I was super interested in the Ganz Linz Project and quickly chucked together a small piece that I was hoping to put down for it, but because of the cloudy weather, it was postponed unti next week. Crap! (I’m still thinking of leaving it somewhere to be photographed, but I’m not sure where/how/if.) 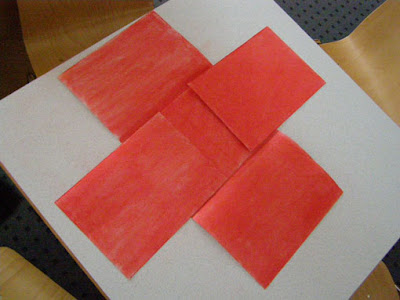 There’s so much on that I knew that I would miss something, but I took the time to just dive in and experience things: Augmented Sculpture by Spanish artist Pablo Valbuena, was an installation about sculpture/architecture and time, which I liked – although the relationship to time was tenuous. The Overtures video documentation was great, as part of the Environmental Centre showcasing work by artists whose work mainly focuses on the degredation of the environment. Then I went to WoW, a piece by Aram Barthol, which was so simple, but so damned effective. Second Life avatars have their ‘name’ above their head and this ‘shop’ had people able to make the real life/time equivalent – a headband with your avatar name above your head: 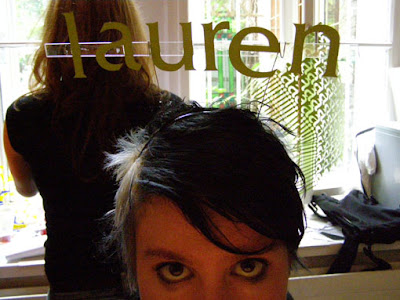 I walked around with it on my head all day and it threw up all kinds of amazing reactions and also thoughts about what is privacy and whether walking around with your name above your head immediately transports you into a game/secondlife/realtime kind of warp – it was absolutely fantastic!

I also went and checked out Australian artist Justine Cooper’s Havidol ‘shop’, which reminded me a lot of Spat’n’Loogie’s New!shop (which I told Justine about too) – it was dedicated to the promotion of her pharmaceutical ‘remedy’ to social ailments. The commercial was absolutely brilliant – taking the piss out of infomercials everywhere – and the list of side effects of Havidol were similarly fantastic (my favourite being inter-species communication) ha!. 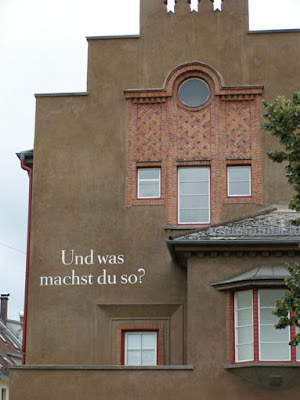 I went along to the jury deliberation of the first architectural competition for SecondLife. It may as well have been a panel, because it was open to the public, with microphones and documentation and it was a fantastic discussion, which hightlighted ideas about the purpose of architecture, the need for constraint, the importance of gravity and what is interesting when there are no boundaries. Some of my favourite quotes from the discussions include:

“Where everything is possible, nothing is interesting” Pascal Shöning
“I’m exhausted by interestingness. The absence of gravity doesn’t necessarily make things more interesting, but actually quite boring” Shumon Basar.

All of these reiterated my belief in the absolute necessity in life (Second or otherwise) for structure in order to create beauty. And as far as second life goes, the structural requirements, as someone on the jury mentioned, are the techonological, financial and the community-based elements of the world. I wonder whether because the basic premise of Second Life is largely the vacuousness of this real life, that trying to fit structure to it only highlights its lack of authenticity as a negative, rather than embracing it. I would have loved to stick around and participate in some more discussion, but I had to get to, what ended up being, my all-time highlight for the day.

Guerilla Radio is a booth and transmitter set up in Hauptplatz, smack bang in the middle of town, and a DJ (or band/combo earlier in the day) plays to the crowd. However, you can only pick up the frequency through wireless headphones that you hire. The platz was filled with a bunch of us listening and dancing to the DJ set, right in the middle of the street. Obviously only those with the headphones can hear the music, so it’s quite comical watching those dancing when you can’t hear the music. Of course I had head phones and of course I danced my arse off – for an hour and a half! 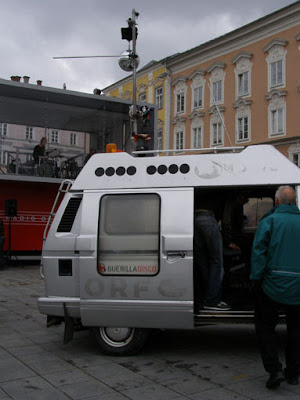 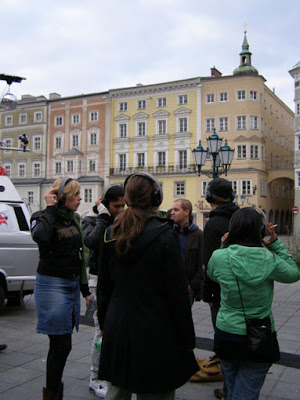 Even though, in the spirit of Goodbye Privacy, we’re all out ‘in public’ and challenging this notion of Private Dancing, it was, actually, one of the most private things I’ve done (others will remain nameless to protect the guilty). There is something intensely private about headphones (as Marcus Brown and his ipod singing sensation will attest to) and then there’s the private nature of only sharing that experience with the DJ and others in cans. I had a great ‘private’ moment with the DJ when, in the middle of his set, while I’m dancing away, he drops the new track which starts with police radio about a ‘disturbance… they’re dancing in the streets’ – which I understood the joke of and acknowledged it so. It was fantastic!! 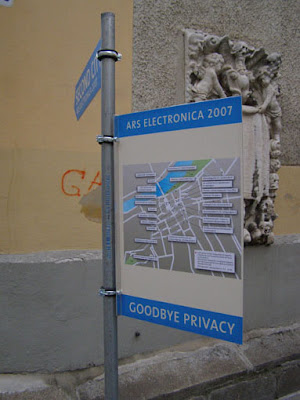 And while I was grooving away, in private/public, I had so much time to think about the concept of privacy and what it really means, given that I felt like I was in my own private Idaho, in the middle of a plaza and I think that Privacy is the feeling of control you have over your environment. As soon as that control is taken away from you, you feel that your privacy has been ‘invaded’. And even if you put yourself into the ‘public’ domain [dancing/singing in the street, blogging, uploading videos to YouTube, divulging secrets on Myspace, etc], as long as you feel that you have some sense of control over that, you can still maintain a sense of Privacy. I do think a sense of Privacy is a fundamental human need, on some level. And obviously, what that level is, is subjective.