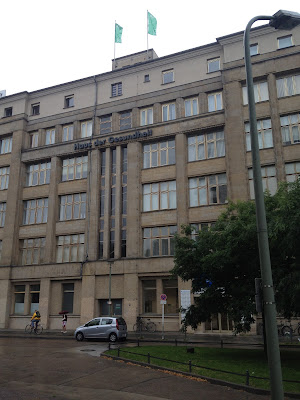 yesterday i officially registered as living in berlin. i had an appointment at the rathaus/town hall and on the way back, walked past this ominous-looking building: an office for health.

initially i laughed at how depressing and dry it looked and how that seemed to be the complete opposite to health. but then i realised that it’s an official building and, as such, it needs to look like one.

of course it looks like that. it’s a government department in the serious business of caring for the health of its citizens.

it got me wondering about current architectural form needing to reflect function, rather than reflecting coherence with the public office aesthetic. if all buildings – health, finance, town hall, social security, education all look like official buildings, are they simply read as part of the political fabric and thus a ‘norm’ for the values of that particular society.

and perhaps as opposed to some kind of aesthetic ‘choice’.

i know, this is getting perilously close to facism and facist architecture, but it did get me wondering that
if you get to choose what your education building looks like – if it looks different to, say, the aesthetic of the treasury, then perhaps, as a society, you get to choose whether it has authority or not. it can be dismissed as ‘different’ from where the money sits. for example.

whereas if the treasury and the education department and the health office and the PM’s office look like they’re belonging to the state, then all of those departments and their inherent priorities also belong to the state.

i think i might be suggesting that all government buildings need to look authoritative. i might backflip on that soon, but i had to wonder if there’s something in public architectural form being linked to the form of public values.

apologies to any architects, or architectural writers/researchers for this one – it’s a thought that popped into my head.