allright kids – i tried it this way, but blogging each day about galleries, doesn’t leave much room for blogging about other stuff like the quirky things i’m learning about london, or the weird keywords that people google and end up here, or a supposition about the relationship between jan van eyck and text. and so on. so, this is the last time i’m doing a small one. next week we’re back to the chunky digest of ‘a gallery per day’. apologies to jade and others who prefer to absorb the info slowly.

by now, if you’ve been reading for a while, you’ll know that mondays is national gallery day and thursdays is tate modern day. for today’s trip to the nat, i hung out in rooms 53 – 56, featuring altarpieces and gilted framed works from the italians up until the beginning of the 15th century and then the last room was the northern renaissance kids – Roger van Weyden and Jan van Eyck. more on jan and roger tomorrow (or the next day).

while i was floating around the italian works, i was transported back to my childhood and the stations of the cross that lined our primary school church. i don’t even remember exactly what they looked like, but i remember looking at them all the time. probably while i was tuning out from the service. last year my colleage and i were asked about our childhood art education, as part of creative education research. i spoke about my more traditional visual upbringing in the catholic system – those stations of the cross, stained glassed windows, bible illustrations and mrs vromen, my super-supportive grade 1 teacher. years later, i graduated from a more traditional art school. my colleague, who went to a montessori primary school spoke of coloured forms and brightly coloured curtains specifically made for visual response and she graduated from a more progressive art school. interesting, no?

anyway, back to the sainsbury wing, i realised that i knew, for the most part, what was happening and what the story was in these old works, because i was taught the bible stories in the same way – through visual [as opposed to written] communication. my understanding of the importance of such work has deepened now. not just for pretty pictures, but for education. religious pictograms, if you like. 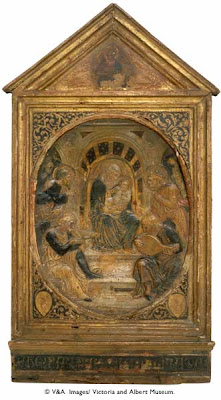 in one of the rooms, i stumbled upon a Donatello painted relief work, Virgin and Child with Saints and Musician Angels (c.1425-32) (above), and stood drawing that for a while, in awe of the way he created space and what an influence he had.

i credit Donatello with the renaissance. i think hanson & hanson (my first year art history text book) do too, but more people should, in my not-so-humble opinion. when the average joe hears the renaissance, he should think ‘donatello’ rather than ‘michaelangelo’, as without one, you wouldn’t have the other. but then, donatello wasn’t fucking a medici. some things never change.

back to Donatello, i gained a deeper understanding of the context of the period in relation to Dante and his divine comedy, even though they’re a century apart from each other. however, donatello, a florentine, created works influenced by dante, a fellow florentine and through being surrounded by works from 13-14th C florence, i grasped a smidgin of the depth of the literary work – each level of hell, just that little bit clearer and more inspiring. this will crop up again later, i’m sure.