While i’m in a major limbo, coming back down to earth after my awesome trips, I’ve been trying to keep a sense of continuity by going to galleries. I’m aiming for the gallery per day thing and hoping to blog regularly about it in the next coming while, and you know, i could just as easily get slack again. But until then, here are some shows I’ve seen lately.. 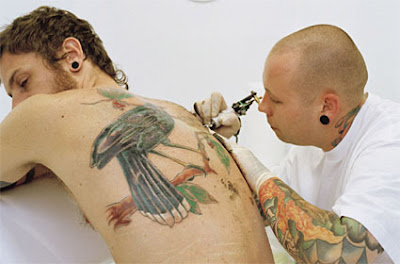 Hayden Fowler,Call of the Wild
Thanks to the CCP website

It’s quite nice to be living in the same town as this gallery now. in past visits, i’ve always popped in to see what’s on here and now i’ve been to see two shows in the last two weeks! i made it to the last day of the International Arts Festival show, which had photographic works by a range of amazing artists, including Robert Gober and Bruce Nauman. At the same time, the Leica Documentary Photography exhibition was on and while most of didn’t float my boat, the portriat series of victims of the war in Rwanda made me feel so ill that i had to vote for it. There was an image of a boy who had a huge chunk of his scalp missing from mortar fire, but it had healed missing, with hair growing around it – it was so disturbing! That work and the series ended up winning the People’s Choice award for the artist, Sean Hobbs.

And then last Thursday I managed to get back to CCP for the opening of their new show, featuring which was pretty cool. I totally loved the documentation of the tattoo performance – it was like Miami Ink meets Matthew Barney – my kind of mixture! 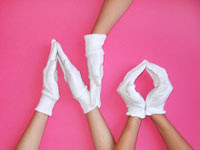 Girls Say No To White Gloves
Thanks to the Blindside website

Blindside
Last Friday I discovered that I had a quick 30 minutes to spare in the city before my train back to the sticks – exactly enough time to pop into Blindside and check out the show. I love Blindside. It’s just the right size for an intimate little show. Nice and cozy without being claustrophobic – a taste test, if you will. And I’ve seen a few pretty tasty shows there.

The show on at the moment, featuring Amy Marjoram, Kate Robertson, Amanda Schembri and Michelle Tran, Girls Say No To White Gloves has amazing promo material and the essay by Claire Richardson is great. The pink little postcards totally caught my eye and I have to say, given that, this show was a little disappointing. The premise is great – bringing the tangible into photographic works, but the show as a whole was, I don’t know, just not quite there yet. The rear-projection work was the beginning of a hot idea – projecting through the back of a framed image – but with the projection being pretty loose green laser works, well, it didn’t quite hit the button.

The book on the ground, of photographic images of ‘grounds’ – tiles, carpet, gravel, etc, was pretty ace, and the fact that you had to get down low and go, go, go was pretty neat. And then that was about it. The video image of a woman sitting at her desk, well, didn’t grab me enough to wait for whatever else was supposed to happen and the images of landscapey type things stuck onto the wall were so retro that they were kind of naff. I’m sorry if you’re reading this and it was your work – maybe I’m a lummox who knows nothing about anything. [Shrug] 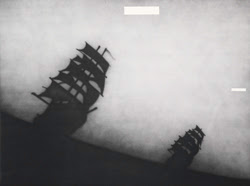 NGV, Postmaster’s Gallery, Outre
Monday, the day before Cup Day was at simultaneously the best and worst day to go on a bit of a gallery jaunt with my Mum and her 15-year old god-daughter. Best because we all had a day off work./school/bludging, worst because most of the decent galleries were shut, either because it was a Monday, a Public Holiday, or they were in between shows.

However, we managed to make it to 3 galleries for the day, which was about a third of what we wanted to. Most of the time was spent in the NGV, with a little time at the Postmaster’s Gallery and then Outre: I know, a clunky mix of ouvres, but hey, it’s what ended up happening. I’m going to rave in detail about the NGV in another post, so I’ll save it. However, at the moment, it’s rocking my socks – currently showing works from the UBS Collection, a great range of decorative arts, Joseph Beuys and great photographic works on portraiture! I’ve needed to hold onto a bit of the northern hemisphere connection, and with the works on at the moment, I’ve been able to do that – Damien Hirst, Thomas Ruff, Ed Ruscha, Gerhard Richter, Kiki Smith, Lucien Freud, Ludwig Mies Van Der Rohe, Herman Miller, Alessi/o… like old friends I had hung out with on my travels. And then we spent a whole bunch of time in the shop. I can’t say any more than that or I may suffer from a severe attack of possession envy and die.

Tuesday was a public holiday, so no gallery visiting, despite almost making it to McClelland gallery for the second day in a row.

On Wednesday, I managed to get there though. Their Sculpture Survey is being set up at the moment, so there wasn’t a hell of a lot to check out, but we really just went to have a peek at the Contemporary Australian Silver and Metalwork show. I’ve got plans to get some work made in silver (when the Money Will Roll Right In), so I’m fixated with the stuff at the moment. It was quite a strange show, with a very clear line between the wheat and the chaff, my favourite work being the cutlery set by Oliver Watts (?) and the blackened silver circular diorama thingys by people whose names I didn’t write down or manage to remember. There were so beautiful and delicate, yet because they were black, they had a little bit of a Tim Burton-esque sinister feel to them, which I think is just yummy sometimes.

I’ve also seen shows at West Space, Bus and Linden since then, but I’ll post about them another day; tomorrow, or something.