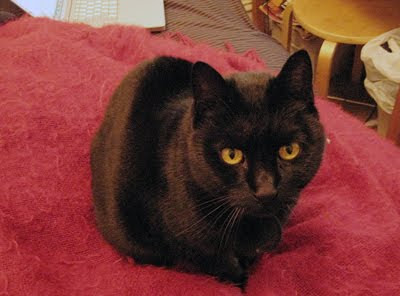 i had to put my cat down on the weekend. she had been with me for 14 years and i cannot tell you how much i miss her already. it’s crazy hurty at she sees red HQ right now.

something i’ve been thinking about during that time is related to ‘their constant loving silences’ that a friend used to describe our pets’ companionship. it’s the sound of her absence that is the biggest, painful silence:

no thump of her jumping on or off the bed
no loud, insistent meow when she heard the crack of a can opening, or the rattle of her catfood packet.
no low adorable rumble of her satisfied purring – the feline vuvuzelas
no sound of licking paws and general grooming
no scratching on the door, asking to be let in/out
no scratching all my magazines, insisting i wake up for her to be fed
no conjugations or diminutive versions of the word pussycat, cat or sweetheart (including poozie, pyjamas, pushkin or gorgeousness)
no concern about the sound of a vacuum cleaner – that machine monster that would drive her under the bed
no sound of three kisses (her particular call)
no gallumph of mad running down the hallway
no growling or hissing
no random skitters across the floor
no taps on the wedgewood saucer, that called for food
no tiny mew when she sees me crying
no general chit chat to a patient and quiet, loving listening cat

ok, i promise this is the last cut’n’paste thing for a while.

i don’t feel that way about the mos def on yo gabba gabba video, the ipad on will it blend? segment, or even this too shall pass by OK go.

well, it’s not exactly what love is, but it’s on the same track. either way i want it. all of it.

following on from the psychoanalyst, the kids, the romantic and the dancefloor. 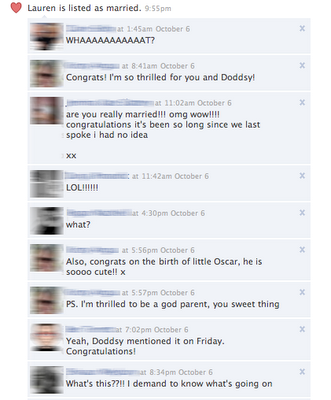 funny how a prank can become an interesting piece of social insight.

last night, out of a warped sense of humour and blatant cheekiness, i changed my facebook relationship status to married. it’s pretty easy to get married on facebook – just a drop-down menu really. nothing to really take all that seriously. in fact, when friends who had been going out for ages went from ‘being in a relationship’ to ‘x is now engaged to y’, i doubted it and texted, just to make sure, even though it was the reflection of fact.

i kind of knew a few people would look at it and laugh, but i didn’t expect anyone to take it seriously. in fact, i was genuinely surprised at the responses i got! thankfully a couple of friends went along with the gag – congratulating me on my marriage to doddsy – the guy with a great art guide to NYC and a complete lack of tact.

interestingly though, what surprised me the most, was the number of shocked reactions! some people i haven’t heard from in a while, some reasonably close friends, some who’ve become strangers – but still, lots of reactions. like getting married still rates as a vital point in a radar for these (mostly) women (ahem, ben?). i have posted all kinds of weird and wonderful messages on facebook over the year that i’ve been part of the cool kids, but it weirds me out that the one that gets the most reaction is marriage.

and then, what does it say about reality? and ceremony? and truth? is it enough to change your facebook status to signify marriage – will this be the new marriage rite? is this a sacred status that should only be changed with proof of a marriage certificate (seeing as people treat it as gospel). what does this say about belief? how much are we still willing to believe in what we read on the internet? these friends of mine are not stupid, i’ll have you know…

can you imagine if magritte had a facebook profile? i’d be his friend, that’s for sure.