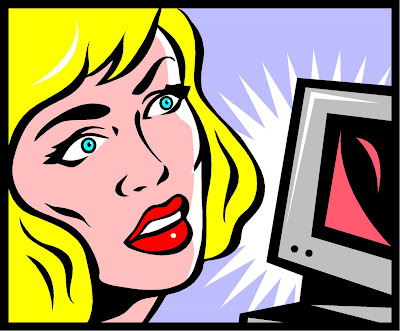 over the last couple of days, i’ve been having a play with my new techy toy (a cool microphone which attaches to my ipod), and chatting to a couple of emerging curators, capturing it all in digital format.

i’ve uploaded the resulting discussions (some of which are me going on a bit, sorry about that)to my new section – sound bits, over there, on the side bar, scroll down a bit, yep, there. i’ve purposedly kept them unedited, unpolished and a bit loose, not just because i’m lazy, but because it’s the equivalent of showing your workings in year 9 maths class, you get to see the whole picture.

i’m going to upload more of these chats with all kinds of interesting peeps in the future, so keep an eye out. and if you’re an interesting peep, i might just ask you to go on the record, if you’re not careful.. ha!

they’re in wav format, so everyone, mac and pc kids alike, should be able to hear them, but if you’re having troubles, post a comment and i’ll do my best to fix it. although i’m not a super-tech person, so it might take a bit of time. 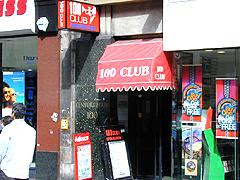 the 100 club is an historic music venue in london. i’m looking forward to popping in there in a few weeks’ time. however, this post has nothing to do with that. well, not directly, although i am going to rant about music later on.

congratulations! you are all now part of the 100 club.

that’s right kids, she sees red turns 100 with this post and for those of you who have stuck around all that time, i’m sorry ‘cos you will never get those hours back. but hopefully at least a couple of them were worth it.

i started this blog as a way to have a bit of online space and exposure for my work until i got my shit together to get a website. then somewhere along the way i got up on my high horse, started reviewing shows, talked about magazines and the state of the world. and occasionally plugged my own exhibitions. i’m glad that deviation happened because i’ve somehow evolved through it too. and i’m grateful for the people that visit me on a daily basis. nothing earth-shattering, but still kinda cool.

and now i have a website, so i can justify my random ramblings a lot easier too!

when my myspace blog turned 100, i created a big long list of 100 things that pissed me off. it was very satisfying, if not altogether a great piece of literary masterpiece. this time, i’ll try to be a little more mature and just focus on one: MTV.

‘what does mtv have to do with art?’ i can hear you asking. absolutely fuck-all. the long-term bee in my bonnet about it got aggravated on a blog the other day and rather than slag off rob’s client on his blog, i thought i would spew about it here.

i’ve been into art and music for ages. art is my first love thanks to my primary school teacher’s attention to my ‘skills’ [more about art education another day] but music is more my passionate lover to my committed art love. i can have vicious arguments with friends about whether the sex pistols are a crock of manufactured shit like N*Sync which almost come to blows (especially ‘cos i’m obviously right).

so, when the topic of MTV came up, i saw red. because in my not-so-humble opinion, MTV is responsible for the worst bands in history and a generation of self-centered arseholes with no concept of anyone further than their myspace friends list.

MTV’s mantra in the 80s was “I want my MTV”. it’s pretty catchy, targets youth with a voracious appetite and certainly reflected the need for something with a bit of spunk. 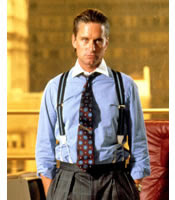 But that’s where my respect for them ends. The 80s was all about gimme. gimme a fast car, a hot girl, nice clothes, a blow job and music to fuck to. now. profits soared, CEOs became the new spiritual leaders, coke became socially acceptable and so did cocaine. AIDS blossomed and New York was the centre of the fucking universe. What better climate than to launch a cable channel that took popular music, used the instantaneous nature of the television and pumped it into homes across the world.

Music became a commodity based on external and ego-driven factors, like everything else. Musicians with 1 hit single became instant celebrities without having to work for it, music became about brand recognition and unit shifting, rather than something that inspired passion. I know that age and probably rob will argue against me on this one. so be it. i’m pig-headed about this. almost as much as i am about woody allen.

So music ‘stars’ are suddenly celebrities, the pressure to ‘perform’ in an accessible way is now ridiculous. Record companies and publicists have worked out the film clip before the last verse has been recorded and thanks to MTV, beating consumers over the head with a product has become standard. Ever notice how many times the latest Beyonce film clip gets played around the time of release? A brazilian, that’s how many!

And thanks to MTV, instead of music being judged on its ability to make you feel something, what it may be saying, the skill and craft of the musician or the relevance to the world at large, music is being ‘charted’ based on album sales, single sales and awarded on these ideas as a result. No other creative industry has been economically rationalised in the way (popular) music has and i believe MTV has played a huge part in that.

The other thing that fucks me off about MTV is that the core, the very seed of the idea behind the channel is actually not that bad. The idea that music moves people and that people want to have access to that often. What MTV could have done is to actually really support musicians over a really diverse range of styles, countries, languages and intentions. MTV could have actually unified so many people, despite their difference in taste. All it has managed to do is to alienate people in creating a greedy, superficial, territorial ideal about music that can be manipulated at the drop of a hat.

OK. so. some of that may not make much sense. that happens when i get angry. i hope it made you think though. if not about MTV, maybe about the greedy rationalisation of art or film or theatre or stamp collecting.

or maybe you’ll just have to come back in a couple of days. i’m reviewing the first draft and MOP show and everything should be back to normal 🙂