every couple of days i check out my blog counter stats, just to have a sticky beak and where people find me from. you wouldn’t believe the search terms that people put in and end up coming to my blog.

i think it’s fucking hilarious, but there’s part of me that feels sorry for the poor fucks that open up she sees red and find a bunch of ramblings about art (mostly) instead of what google has told them they’d find.

here are some of my personal favourites:

tell me about yours too!

is it possible to be quite as geeky as me and still get away with fooling that world that you’re actually quite cool? sometimes i don’t know how i do it! ha!

to start with the geek fest – i’ve fallen in love with blogs all over again. i mean, i’ve loved them for a while now, but through following a comment from one blog, to another blog, i found the new love of my life – LED Throwies! Interactive Architecture.Org is my new best friend after introducing me to these things! So many possibilities for fun and games… 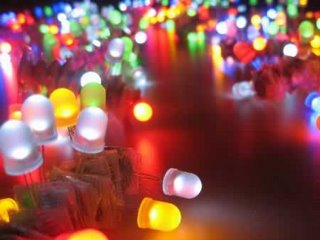 So on thursday night on the way home from work, i decided to head to the old DSE and see if i could purchase the bits and pieces needed to make one. And then if i made it work, i could go nuts. The guy behind the counter – whose name for the sake of this blog is James, and i, spent a good half an hour, poring over the LED pages of the supply catalogue, testing out batteries that would suit – trying to find the right luminescence to weight ratio and trying to recall basic electronic theory, which states the the current in a series decreases.. or something, i can’t remember exactly. but boy it was hot – while everyone else was out doing late-night shopping, seeing bands at the youth centre, or having cheap drinks at the pub, i’m in an electronics store geeking it up for the sake of art!
woo hoo! and i’ve got friends? wow!

so to offset that ultimate nerd flavour, yesterday i went to paddington and emersed myself in the über style that is the inner eastern suburb of chic du jour. well, actually, i really went so that i could check out a couple of galleries, but hey – i’m sure the chic rubbed off a little at least.

firstly i popped into Sherman Galleries, largely ‘cos it was on the way to where i was originally headed, secondly, i wanted to check to see what they had on and thirdly i thought i might bump into Lisa who works there and could say hey. the show they had on was surprisingly beautiful. with the first work i saw of philip wolfhagen, i kind of groaned – it had lots of paint, it was landscape and an image of a fire. ugh. however, i persisted and actually went into the gallery and found some incredibly beautiful works. almost the painting equivalent of Bill Henson’ landscape photographs. Huge canvases with, low and wide perspectives of, yes, landscapes, but they were of things like 5 minutes before the storm, or just after dusk across a vacant lot. really quite beautiful and i could have actually looked at them for ages. his choice of light ‘moments’ was great and i was equally pleased to see that these huge, sometimes ominous works were selling well. it’s good for my artist-as-crap-career-choice cynicism to see a bunch of red stickers on work that is worth $15,000+ (in every sense of the word worth). and not only did i get to check out this surprisingly beautiful work, but i got to catch up with a bunch of sherminator gals! tanya and lisa were both there and chayni henry (Primavera, SafARI, etc) had popped in to visit, so it was great to meet her too! see i do have friends! 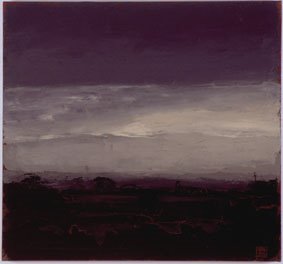 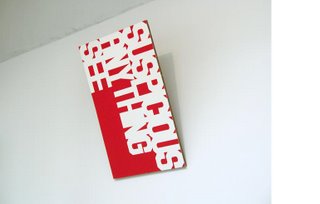 then i dragged my friend down to the new Sarah Cottier. i was excited about seeing this show – i only became aware of Sarah Cottier towards the end of my degree, when they were in Redfern and i have a vague memory of the first show i saw there containing a huge car just sitting in the middle of the gallery floor(?). Maybe i’ve got my wires crossed, but anyway, it was amazing to me at the time and i was looking forward to seeing what the new gallery had installed. After reading artswipe‘s review of it, i knew that i had to make the effort to see the show before it closed and i’m glad i did.

as a complete show, it was nothing to really rave about. as a taste test for things to come, it was delicious.
i totally dig Rose Nolan, and although her See Anything Suspicious work was a slight anti-climax after her huge 32.Banal Ideas Cannot be Rescued by Beautiful Execution. in the Biennale (which i loved), i’m excited about the prospect of seeing more Nolan works. Other works i dug as a taste-test were Koji Ryui‘s Fantasy Drawing, made out of straws (or plastic & nylon monofilament according to the room sheet!), Stephen Bram‘s Untitled (Two Point Perspective) and John Nixon‘s Silver Monochrome. Other works were OK, but not necessarily rave-worth. I am looking forward to seeing the forthcoming shows at Sarah Cottier though. 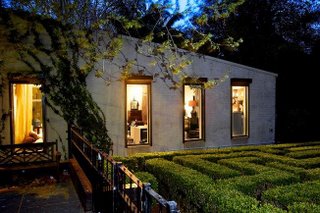 And then to top the whole experience off, i returned to my geekness by getting deliriously excited about the Neild Maze, next to the gallery. It was so rad! this little slice of childish delight in the middle of oh-so-adult paddington and throwback to european taste. my friend and i took turns in getting to the middle of the maze (which is about waist-high hedge) and taking photos of each other.