sometimes i like to call myself an artist. but you wouldn’t know that from the random stuff that i’ve been posting about lately. so i thought, in the spirit of getting back to basics, i might post about some shows i’ve seen. how’s that for a novel idea?

I always stumble over the spelling of Bourgeois. I put a ‘u’ in where it’s not wanted and an extra ‘e’ sometimes. And not enough ‘o’s – it’s all just wrong. And even when i spell it right, i still looks wrong. But then again, in some way, it endears me to her name. In the same way that her uncomfortable images and the squishy, squelchy, fuck corporeality of her sculptures endears me to her as an artist. [see what i did there?]

I went to see the latest survey of her work at the Tate Modern on one of the last days I was in London and I’m so glad I had the chance to do so. Feltbug treated me to a day as her members’ guest – including scruptious brunch in the lounge with the amazing views on the 6th floor.

I’m only a recent fan of Bourgeois’ work. I’d only ever seen a few bits and pieces – documentation of a few of her cells and the black Cumul piece – and and to be perfectly honest, i wasn’t quite sure what all the fuss was about. It wasn’t until my friend and co-curator, Moira Kirkwood, suggested practically ordered me to check out her works, especially the Red Rooms, that I came to love this french artist.

The early works of hers I love the most are actually her drawings – they show a conscientiousness and a committment to thinking and process that I admire and respect. The point at which her sculptures really spark my heart are just before she gave birth to Louis, her first child. You begin to see the motifs she uses in her later work and the work takes on a more mature, yet grittier feel. 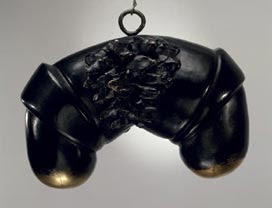 And from then on, she just rocks. Even when her style or materials take a wide swing, you can still feel that it’s on the same path. Works like her Janus, which look like two ends of a penis joined together under a collar, are still clearly part of the same process as the large doorframe installations that are the Red Rooms. She continues to use curves and sex and emptiness right the way through her career and it’s this return to these themes, again and again, which give her work a solidity and presence.

Favourite works of mine includeEnd of Softness, a bubbly, jubbly, wobbly work in bronze with a gold patina; the Janus Fleuri from 1968, the white version of the Cumul I and the Passage Dangereux from 1997, one of her first ‘cells’ and the first one which I had seen and understood its power and relationship to her investigation into psychoanalysis. In fact it looked like a sculptural representation of surrealist work by Tristian Tzara or Frida Kahlo.

After her mother’s early death, critical writing of her works always mention the huge influence that her philandering father had on her work and the rage that she had for him. However, it became extremely obvious to me that, in fact, the greatest influence on her work may actually be her child and the act of being a mother. The taboo nature of the body is replaced with a detached pragmatism and unconditional love of the icky bits of the body and the mind.

There was only one thing that annoyed me about the show and that was a piece of wall text that said “fabric has no structure”. To which my only possible response was “bullshit”. It confirmed what I always thought about wall-text, in that it often has undue influence over the viewer. However, that, my friends, is for another time.

The cabinet of curiosities in the final room of the show is fantastic and nicely concludes the show – like a well written final paragraph. It includes small works from right throughout her career, plus more of her drawings and domestic works and the video documentary outside in the cafeteria was so insightful and lovely, i’ll have to find it for myself and watch it all the way through.

Apart from her amazing work, one of the major reasons I loved going to see this show was to have my life as a female artist validated. Louise is still alive at 96, still making work, is still inspiring and her career only really took off in her late 40s. Longevity counts and this show is a testament to that. What a great role model to look up to.

all images pinched from the Tate Modern website. check it out for the room by room walk through of the showthanks for subscribing to she sees red by lauren brown. xx