actually, i do know. i was ill for a few days and then last week was a bloody mammoth week. on monday i had to see a man about a dog (read: scumbag about a bike accident), tuesday i was part of yarra city’s arts and cultural advisory process*, wednesday, masters gilbert and george were in the hizouse and i went to see them at the NGV, thursday there were 2 fab art openings that i had to attend – nauru elegies at blindside and then, where the bewdiful schappylle scragg reinacted carolee s schneemann’s interior scroll work, friday night saw jenny holzer in town at capitol theatre and then i spent saturday afternoon/evening in the studio. holy moly.

i want to talk specifically about gilbert george, schapylle’s performance and the jenny holzer talk. i’ve got lots to tell about what i’ve been working on in the studio, but that will have to wait.

george the cunt and gilbert the shit

gilbert and george were great. they really were – they always are. but if i’m honest, i left feeling slightly crestfallen.
virginia trioli really didn’t know anything about her audience (who were mostly artists/arty types well-versed in the art of G&G), so she really just skated the surface. disappointment #1.

i’m ashamed to say that i felt more inspired, joyous, enlightened and challenged by the supremely excellent video interview by hans ulrich obrist, the lives of gilbert and george. he probed their processes, left room for quips, but kept plumbing the depts of their practice. virginia just tittered.

and the second major disappointment was as a result of that lack of rigour in the interview, when she asked about the germain greer incident. gilbert’s answer about her being a grumpy old woman was seriously unsatisfactory, as was the response that their work displays the kind of sex most women like. i happen to love sex with boys, but even i was offended at that.

and rather than pushing a little and discussing gender/sexual politics, she flippantly mentioned that she also sleeps with girls and faded off. sorry – that left a bad taste in my mouth.

here’s my fantasy version of it, which wouldn’t have left me feeling that some of my favourite artists are actually misogynist and downright mean:

“germaine greer quote”, etc: oh, look we do love germaine and her quaint ways, but she’s barking up the wrong tree here. when we say ‘we make art for all’, we don’t intend that to be a singular prescription based on gender. we can only ever make work from our experience – which happens to be a white, male, middle class, homosexual one. we’d like to smash the patriarchy with her, but we prefer to take naked pictures of them instead. 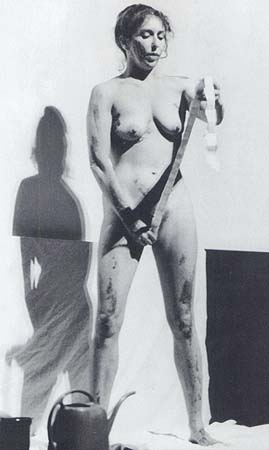 and speaking of cunts, it was super, super, super awesome to see schapylle scragg (aka mayhem) perform at the margaret lawrence gallery. i’ve been craving some art that is ‘fucked up’ and seeing her in all her scraggy bogan glory, replete with blonde curly murkin was a relief! her australian flag cunts are just fuckin’ fantastic and i want one for my wall.

watching her re-enact carolee schneemann’s interior scroll work (pictured above), filled with refereneces to beer slogans and terrible boganisms was glorious and painful at the same time. in fact, the highlight for me was watching a room of hipsters raise their glass in toast to a ‘big cold beer’ automatically, before they realised what they were doing with this blonde mole and by then it was too late. the performance finished and there was a palpable sense of shame and remorse at being complicit in the act. oh god it was awesome!

i don’t have the schutzpah to get up and do what she does, but i’m bloody glad she does. you should all go and see the show, if you can. and buy a cunt. they’re beautiful.

jenny holzer at the capitol theatre ok, well, i did want to talk about the jenny holzer show, but i’m tired and need to go to bed.

suffice to say it was ace. image-heavy, but an enlightening travel through 40 years of text-based practice that weaves between renegade/permission, inside/outside exhibition. jenny rocks. she has so much integrity and grace – she is so articulate, in a very humble way, that it almost made me cry.