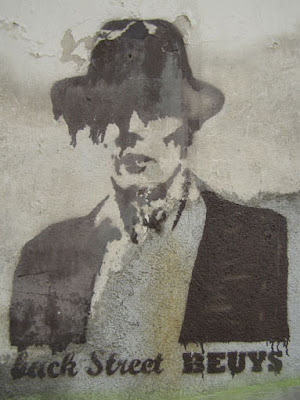 brilliant, i tell you, brilliant

In my original travel plans, I hadn’t intended to come to Vienna. It was more of a deviation east than i was intending and i was thinking that i’d rather just spend more time in Venice. Thankfully my best friend Sarah reminded me about Hundertwasser in Vienna, which reminded me about Egon Schiele and The Third Man in Vienna. Phew! I almost missed out on one of the most culturally rich cities in the fucking world, all because it was a ‘little out of my way’.

My first impressions of Vienna were absolutely shite. I rocked up at the hostel and all I could see was yet another utilitarian grey block, thanks to Hitler, Speer et al. It was way further out of town than I thought, was full of school kids, the rooms stank, the food was scheiße and Lunchlady Doris was working in kitchen. I just got over all of that, when at 6:30am, our room was woken up by the alarm clock of a girl in the bed near mine, who was in the shower. It went on and on, and on. louder, louder, louder. I managed to turn it off somehow, only to have it go off again 15 minutes later! fuck! so, in the interest of the common good, the alarm clock ended being taken out of the room and flung down the hallway, by someone resembling a tired australian who swears a bit.

So, the first couple of proper days in Vienna have been spent in the MuseumsQuartier, checking out 4 amazing art institution and some fantastic exhibitions. 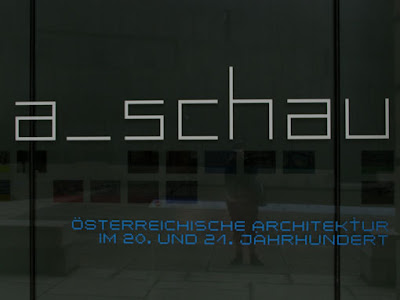 Yesterday I checked out the abso-fucking-lutely fantastic AzW: ArkitekturezentrumWien and the brillian show a_schau – a survey of Austrian architectural milestones from the 20th/21st Century. The Austrians are well-known for their architecture and it was great to see it all laid out in one show, with images, text and social/political context (including, yes, that ol’ WWII thang). And the accompanying typeface was wicked – all architectural like-ish. Grouped into Prologue (from around the time of the Secession, the pinpoint of modern architecture in Vienna), Red Vienna, Landscape, Power (Hitler, etc), Reconstruction, System (post-war economic efficient crapness), Idealism and Collage, covering a generation of architects each time. I found out that Linz was Hitler’s favourite city, which put a little bit of a bad-taste tarnish on the fantastic time I had there. heh. The whole centre was great! I couldn’t absorb any more architecture, so couldn’t check out the Margherita Spillering exhibition, but I did buy a little cut-out plan of the Secession, so i can have my own little model at home! tee hee! 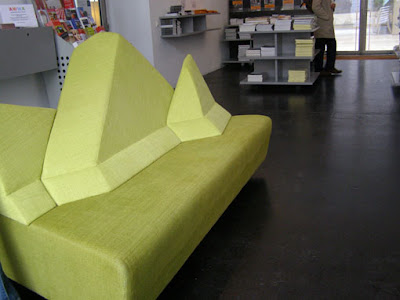 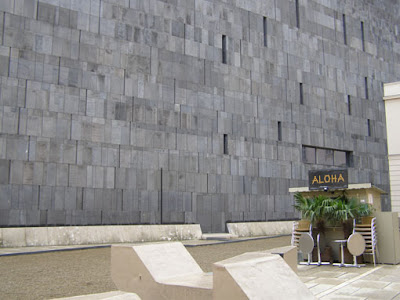 After heading back to the hostel to recharge and regroup, I went back to MQ and went to MUMOK, the MUseum der MOdernKunst (Museum of Modern Art, just in case you didn’t pick up on that complex German there…). There were 2 major special shows on at the MUMOK, a Sigmar Polke retrospective and an installation by Austrian artist Markus Huemer, plus the exhibition of their modernist collection on the 8th floor. I went up there first and it was fucking amazing! It was a strongly curated and designed show, with a range of painting, sculpture, product design, architectural models, film, photography, hell they even had typeface design workings by Herbert Bayer (an ‘n’, ‘h’, two ‘a’s and a ‘d’, for those who have a bit of a font fetish). It really showed the importance and marked interdisciplinary aspect of modern art – Mies Van Der Rohe did buildings and they had his Barcelona chair there. Bayer’s fonts and his famous photograph of the guy with the chunk out of his armpit. Mondrian paintings and then the architectural model of the building which replicated them, designed by. Sculpture, replicating paintings, drawing replicating font, line and form becoming theme and content in their own right – such an important collection in terms of understanding the history of art and visual communication! Worth the entry price alone!

After that ecstatic experience, I checked out the 3 floors of the installation by Markus Huemer. He has a thing for blue in the same way I have a thing for red – he uses it as his indicator (or signifier) in a range of methods: A series of blue screens, with subtle differences in resolution and method of projections, a great interactive piece where you could create a Pollock-like Abstract Expressionist work by walking across the room and triggering sensors, and the lowest floor was a series of large paintings depicting half-drawn pictures of flowers and trees – nature, with titles like trojanhorse.exe – the modern plague bacteria.

Sigmar Polke is someone I should do like his use of lacquered tracing paper as substrate (yes Charles, there’s that word again), I like his ‘not touching the paper’ type absorption works and his toner transfer works, but they are only a few aspects of the work and when i see it, all i see are the trillions of naive bitsy shitty works that have been spawned in his wake and I want to vomit. harsh? genau, but i can’t help how it makes me feel. 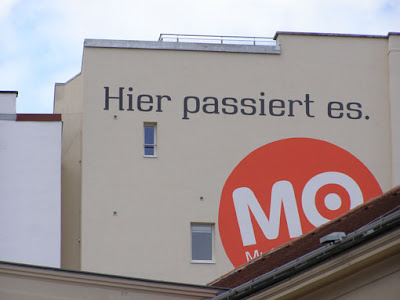 Today, I hit the last 2 big galleries at MQ: the Leopold Museum and the Kunsthalle Wien.

The Leopold Museum houses a great collection of Gustav Klimt, Oskar Kokoschka and Egon Schiele’s work. But to be honest, I only really wanted to check out Egon Schiele. I know he’s a really important artist, but Gustav Klimt still leaves me cold, despite a brief backflip a while back.

But Egon Schiele, man, I could go on about him for days. And days. His paintings are the stuff of love – and I don’t mean gooey Hallmark love, but sinewy, angular, a little bit skewiff, enraptured, awkward love, not to mention pink bits. If Courbet is the king of painting “The Source”, then Egon Schiele is the righteous prince. But that’s not exactly what I love about his painting – it’s the way he paints, with a great combination of glaze and goop, line and form, soft and hard (and if you’ve ever painted with oils, you’ll know how hard that actually is). He does hands, feet and faces like no other and I can’t do any for shit, which is possibly why I idolize him. And then outside his paintings, he’s got all the hallmarks of a rock’n’roll painting icon – school drop out who drew all the time, went to art school, but fought against it to create the NeueKunstGruppe (New Art Group) and was incredibly prolific before dying a tragic death in the Spanish Flu plage of 1918, 2 months after his new wife and 6 month-old had succumbed to it. If that isn’t beautiful and tragic, I don’t know what is. (A record by The Smiths, perhaps?)

Then, same as before, I went back to the hotel, took time to recharge, organise accommodation/travel for the next week and then headed back to the KunsthalleWien and the show Traum and Trauma (Dream and Trauma – great title) 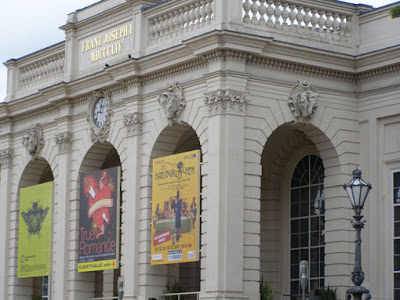 Holy shit, this was a great show! It’s works from the collection of Dakis Joannou, which I didn’t realise until I got there – he’s known to me as the collector of Tim Noble/Sue Webster’s work, whose work I love, so i knew this show was going to be great. There were about 35 fantastic artists, including Kiki Smith, Cindy Sherman, Maurizia Catalan, William Kentridge, Jeff Koons, Gregory Crewdson! Big guns, I tell you, big guns in the contemporary scene. My favourite works were by Noble/Webster – the Black Narcissus (silicon casts of Noble’s dick and Webster’s fingers, together to make a silhouetter of their Janus-like two-faced head) and He/She – those fantastic sculptures of found objects/welded steel to make the silhouette of them pissing. Shit hot stuff, i tell you, shit hot. And each room had a little tear-off room shit that you could take with you and have your own mini-catalogue. I really, really want to buy the proper catalogue, but as it is i’m carrying around too much crap and have no way to get it home. Amazon wishlist, perhaps. 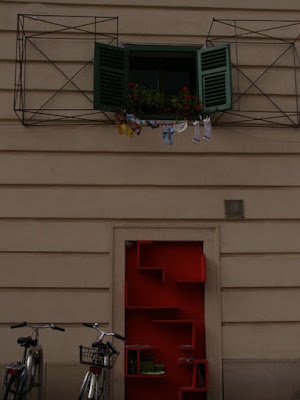 If you’re ever in Vienna only for a couple of days, you could do worse than just spend your time in the MuseumsQuartier. Not only are there those 4 big galleries, but studios for artists, design studios, fashion workshops, art supports orgs, the Design Forum and animation houses. I believe that culture needs to be intergated into the fabric of a city/society, but having it all in one place certainly packs a mean punch.

I’ve got a few more days here, in which I’m going to squeeze in Hundertwasser Haus (oh yeah), BA-CA Arts Forum and a walking tour of Vienna themed around The Third Man (only one of my favourite movies of all time). I’ll keep you all posted about that, don’t you worry. Heh.