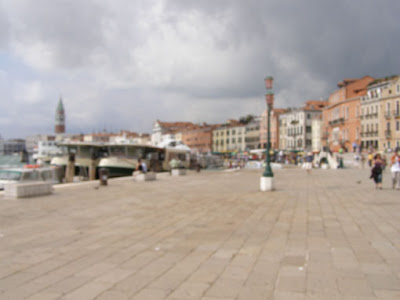 Day 2 and 3 ofVenice were spent checking out bits and pieces in the city and then the Arsenale section of the Biennale, respectively.

Sunday I took the opportunity to do the city wandering bit because most of them were closed on Mondays. But my second day in the city was full of fuck-ups, false starts and frustrations. The main reason for that was the fact that Venice is THE most disorganized and frustrating city in the whole universe! [edit: scrap that, I’m in Athens now and it’s worse]And packed with Sunday tourists, it’s worse than I ever imagined, especially because I had no idea! I had to queue for everything, there are no toilets in the place and no pubs/cafes let you use them. And trying to find your way around is worse than food poisoning – it’s a case of back’n’forth, back’n’forth, trying to figure out exactly which bit on the map is where you’re at – and only half of the streets have street signs, the numbers are even more erratic than central London and the crowds are full-on.

After having no luck at the lost property office (I left both my hoodie and scarf on the fucking train from Vienna and they weren’t handed into the Venice office), It took me ages to find the second Australian pavilion in the Palazzo Zenobio – around and around I walked, finally running into a couple of friendly and equally lost midlanders who shared their slightly better map and we figured it out together.

Once I made it there I was pleasantly surprised to also find that Charles Avery, the great Scottish artist, based in London, was representing them in this year’s pavilion with some great drawings based on his story of a mythical island. 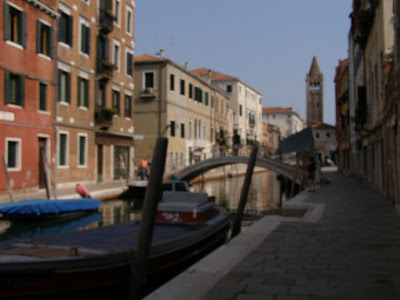 The first of the Australians I went to see was Callum Morton and his work Valhalla, a site-specific installation/sculpture of a derelict building, based on the dereliction of a building his father designed, but also reflecting images of destroyed buildings we see daily from Baghdad and the WestBank. The exterior is graffitied, with overgrown lawn and holes everywhere, but the inside is like the lobby of some faceless corporate headquarters, complete with bad musak and lifts, although with a weird ghoul-like infernal soundtrack, which is at once hilarious and slightly odd.

After chatting with Anna, a super-helpful member of the Italian Oz Pavilion staff, I headed into town to check out the Susan Norrie and Bill Viola video works.

Susan Norrie is an amazing video artists and her work HAVOC tracks the destruction, political action and clean-up surrounding a volcanic mudflow in West Java. In typical Norrie style, she manages to combine intense images with a slow-moving beauty, only rivaled by Mr Bill Viola. His work, in the rear of a church behind Piazza San Marco, is a 3-screen video work of people being saturated in water, going from black’n’white to colour and their physical reactions to it. It’s all about restoration and re-birth, as usual, and very beautiful. 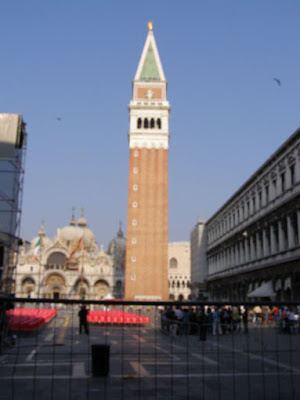 The only down side to the Viola work was that it was so near Piazza San Marco. Which meant that, in going to see it, I had to follow the crowd (and we all know how much I love doing that) to the square, cross the nightmare that was the square and on the way back to the vaporetto station, cross back through the plague of pigeons, which people persisted on chasing – it was gross – the whole thing! I can’t imagine why people would want to go there and not want to vomit.

The rest of that night I spent just wondering around Venice, getting something to eat and getting a feel for the city after the tourists had jumped on the Intercity home. 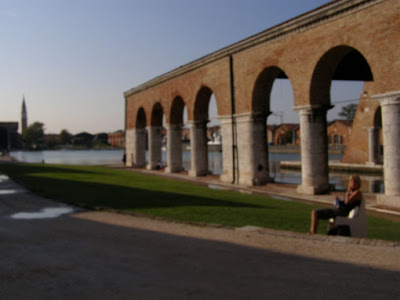 Monday was a lot better – I slept in (just because I wanted to) and despite the rain, headed towards the Arsenale. The rain quickly cleared and it was a glorious day to walk around the ex-wharf/warehouse area. It’s a little bit like a combination of the Everleigh Rail Yards and Wharves 4&5 in Sydney – industrial, on the water and absolutely stunning. One image I took there reminded me so much of a De Chirico painting.

A lot of the work in this version of Robert Storr’s curated exhibition actually reminded me a lot of the works I had seen in the Sydney Biennale’s Zones of Contact. There was a lot of work about war zones (Emily Prince’s images of All the American Soldiers Killed in the War on Iraq and Afghanistan, Not Including those Wounded, or the Iraquis or the Afghanis, was quite amazing, as was Israeli artist Tomer Ganiha’s Hospital Party), about zones of restriction and of tourist areas – including a great work about [Tijuana] tourist junk by Jason Rhoades.

The best works included Prince’s, a great work by American in Germany, Christine Hill called Minutes, as part of the Volksboutique projects – a series of portable ‘trunks’ which contain everything you need for the home office – folders, telephone, stationery, desk, change of clothes, mirror, suitcase.. all in a trunk the size of a bass amp ‘fridge’ roadcase! It had an accompanying catalogue, another converted moleskine diary, but they had sold out, which is probably good for me, considering the amount of stuff I’m lugging around; and Marine Hugounier’s Homage to Ellsworth Kelly, well, needless to say, I tipped my hat in mutual appreciation.

The other great work was by Ignasi Aballi (the guy who did the list of languages in the Grande Padaglione Italia)– lists of criminals, nationalities, deaths, drugs, money, etc, cut from the headlines of spanish newspapers. 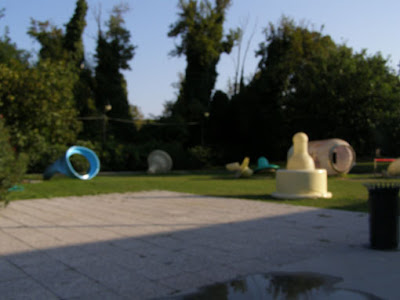 Apart from the group show, other pavilions I was able to check out were the Turkish pavilion, which featured a really lovely installation called ‘don’t complain’; one from People’s Republic of China, video and sound work in a fantastic industrial block plus oversized baby’s dummies and bottles; and the Italian pavilion – the first one in almost 20 years since the one in the Giardini was turned onto an international survey pavilion. This year the Italians got a lot of press interest, not just on their return to being a part of the festival, but also about Francesco Vezzoli’s Democrazy, featuring slebs Sharon Stone and Bernard-Henri Lévy as US Presidential candidates. All the hype was actually deserving as it was a fantastic video and scary how much Shazza reminded me of Hilary. Things that make you go hmmmm

Of course I didn’t get to see absolutely everything at the Biennale – I never do – but I do wish that I’d been able to stay a little longer. Venice takes a while to get your head around and it took me the first 2 days to realise that it works on a completely different ethos – that wandering around and letting things surprise you is a bit part of the experience.

*i’m calling these images ‘paintings of venice’ because my camera is busted. don’t give me too much grief about it. other ‘paintings’ are on my flickr site, as ususal.