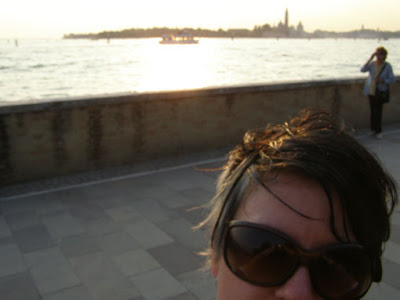 So from Vienna, I caught an overnight train to Venice, which was quite a strange experience for me. I scored a whole sleeping bunk room on my own, so I made myself some dinner, turned the lights off to watch the scenery, jumped into my Pjs, put some music on and promptly fell asleep at about 9pm! In fact getting changed into my boxers on a train carriage was one of the strangest experiences I’ve ever had – all I could think about was Samuel L Jackson: “motherfucking naked on a motherfucking train!” Ha!

I woke up at almost 7am in Italy, near the Czech border, and watching a fantastic landscape go by. over breakfast and chillin’ into the day I could see amazing fields and lighter trees, the water was a different colour and it was warm! Yay!

My first day of Venice was focused on getting to the Biennale. After checking into my hostel and having to switch languages (I was just getting used to communicating in German!) I headed to the Giardini to see most of the International Pavillions. Given my time over, I’d give the Giardini a full day, but today I only had 4 hours, so I was ruthless. I planned an attack strategy and I think it turned out OK. I started with the Australian pavilion, because I was looking for something familiar, then to France, Great Britain, Korea, Russia, US, Italian Grand Pavilion and Israel. It sounded like a great travel itinerary and I’m kind of surprised that with your ticket you don’t get a ‘passport’ and stamps at each of the pavilions, where you can keep track of where you’ve been, but also to have a fun kind of element to it.

In the Australian Pavilion, Daniel Von Sturmer is one of my ‘you’re so awesome, it hurts’ artists (which regular readers of this blog will know), so I knew I would love the work. And I did. He created this wooden pathway, which wound its way across, up and around the pavilion, leading the viewer to a series of screens and sculptural works. Daniel’s work is all Art Geek and perhaps that’s why I love it – his work references ‘the plane’, drawing, perspective, scale, colour – everything you need to think about when drawing or creating works. Also the kinds of things which are vital to changing your perception of an object and/or environment.
I could understand that some wouldn’t like it because there wasn’t a lot of accompanying information, but on a very personal level, that didn’t matter to me so much.

The French have been ruing their lack of international contemporary art clout for a while, but if they can follow in her footsteps, Sophie Calle is going to lead French artists out of such despair. Her work Prenez Soin De Vous is my favourite of the whole Biennale, so far. It’s a deconstruction of a ‘Dear John’ letter written to her, in terms of the variety of ways in which we all deconstruct anything meaningful: text, language, love, drama, perspective, personality, comprehension, context, emotion and memory. She got a variety of people to process the letter in a variety of ways, the list of which included: judge, historian, advocate, criminologist, romance novelist, ethno-methodologist, CONSULTANT EN MATIERE DE SAVOIR VIVRE, psychiatrist, INSTITUTRICE EN MATERNELLE, diplomat, public ECRIVAIN, graphic artist, mother, stylist, ADO, commissioner of police, COMPTABLE, translator into SMS, proof reader, English translator, crossword developer, latin writer, ECRIVAIN, NORMALIENNE, sexologist, journalist, cockatoo (who ate the letter and then said hello!), meditator, designer, composer, philosopher, psychoanalyst and clairvoyant.
and then made 36 separate movies of performances about the letter, with actors, musicians, singers, dancers and other performers, including big names that I knew such as Peaches, Miranda Richardson and Yolande Moreux. It might not sound like a very interesting or engaging piece the way I’ve described it, but it was bloody brilliant and had something for everyone – even if you couldn’t speak/read/understand French– on an intellectual and emotional level. I could have sat and watched the movies for ages, but needed to get going. 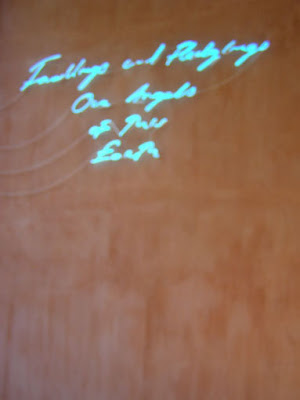 “Trace” – Tracey Emin(who I have a particular soft spot for, and about whom I wrote an essay during my studies) – represented Great Britain in the Giardini (although Scotland, Ireland and Wales have their own pavilions in the city). And it was fucking excellent. It featured a range of drawings, sculptures, prints and paintings (she’s a good painter) about the pain of sex (wanted and unwanted) and the constancy of having an abusive upbringing. While some may roll their eyes and say ‘not again’, or, as overheard, “people pay for this?” “no, people pay to buy this”., I think she does it in a way that’s strong enough to keep reminding and subtle enough to be adorable. I loved the show and I even picked up a little souvenir for myself and a surprise present for Claire – I’ll show you once I’ve give it to her. Interestingly, the Sophie Calle exhibition about emotional pain was packed and well-loved, but Emin’s show about sexual pain is “too difficult” and uncomfortable. 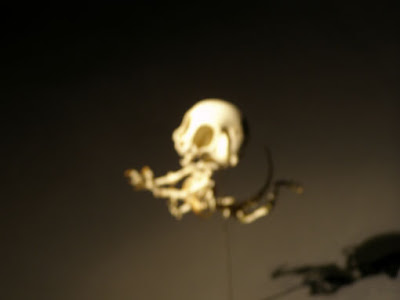 I was really pleased to see Korean artist Hungkeo Lee representing Korea and feel that it’s inidicative of the progressive nature of Korean art at the moment that an artist using cartoons/animation figures in an anthropological manner (and featured in ‘low-brow’ mag, Juxtapos) is selected as their representative, rather than someone showing more‘serious” work). The show included the skeletal remains of two characters in their natural environment – the cat chasing the mouse – with two separate lab-type rooms: one with a bunch of containment and testing devices, the other replicating a museum display, but with the tools and processes in making of the creature as the subject. I found it poignant that making a cartoon creature a “vertebrate” gave it validity of sorts.

Felix Gonzales-Torres is a dead artist representing his country at the Biennale and is showing some fantastic works: word based images of Americas ability to create death and destruction – equating their fighterplane production with their ability to produce movies about death, liquorice bullets for the taking (endless supply) and a beautiful lightglobe work in the middle of the entrance. 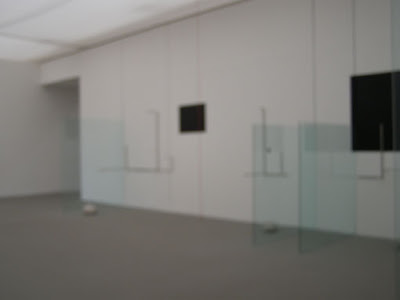 The last major pavilion I managed to see for the day was the fantastic Padaglione Italia – the group show curated by Robert Storr: Pensa con I sensi, senti con la mente: l’arte al presente [Thinking with the senses, feeling with the mind: art in the present tense].
By this time it was about 5:15 and I had 45 minutes to check out work by about 50 artists, so, again, I had to be selective. I ended up checking out Shaun Gladwell and his well-known Storm Sequence plus a new work Broken Hill Linework. Projected onto the floor, you could see the ground moving underneath your feet, and if you stood in the right place, could feel like a skater. I was impressed with Waltercio Caldas’ Half Mirror Sharp – a great 3D installation manifestation of a modernist painting (shown above, not so sharp, thank to my shit camera) ; Sol LeWitt(RIP)’s black and grey scribble works, Ellsworth Kelly’s relief works – (the man is still alive! I had no idea!), Kara Walker’s silhouette animation, Louise Bourgeouis’ grid of drawings, Raymond Pettibon painted on the walls of the room and had such gems such as ‘professionalism is a hate crime’, plus a great work filling the walls of a room with an alphabetical listing all the languages of the world (by Ignasi Aballi), and then old mate Fred Sandback again creating a sculptural diagram in 3 dimensions with yarn.

Then the ‘go home you bastards’ announcement came over the PA. I spent some time wandering around near the Giardini, soaking up some of the sunset and then went back to the hotel to recharge. 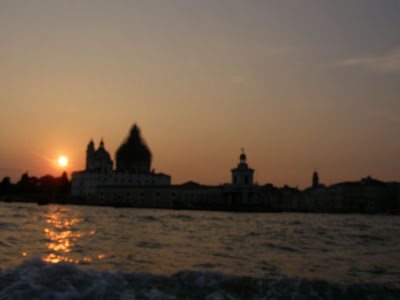 Phew! What a day!

*sorry for the lack of titles in the Padaglione, you didn’t get a room sheet and I ran out of time to write them down.