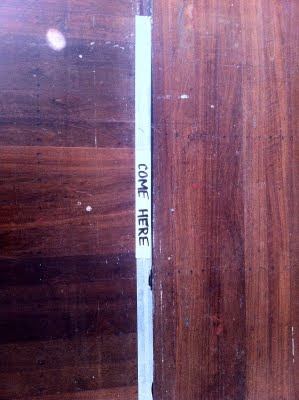 i haven’t been so exhausted working in ages. but it’s been a fun week.

i’m working on this still-kind-secret project at cia in perth involving people and space and measurement.

yesterday we (my partner in crime, steve, and i presented to the board  a bit of our methodology, some of our early findings and threw out a few questions/points of discussion about our project. which is kind of hard to describe to you guys, because it’s a) still confidential and b) we’re yet to properly describe it to ourselves.

what i can say, though, is that money is easier to achieve than time, and we’re more motivated to make people go away, than we are to make them come here.

and we found that through a program of depth testing and intense focus and insight developments, complex social engagement protocols.

otherwise known as tug of war.

it was brilliant. danger zone from the top gun soundtrack played in the background, primal grunts and angry reserves of energy were drawn on.
michael, tony and kelly – the money team pulled time (steve, kate and bonnie) over the line,

in the second round: come here vs go away, it was a tough match. everyone learnt from the first round’s experience, they dug heels in, yelled, encouraged each other, grit teeth and the swearing came out. at the end of it all, there was more prepulsion for go away and just not quite enough energy for come here.

we all learned something that day.