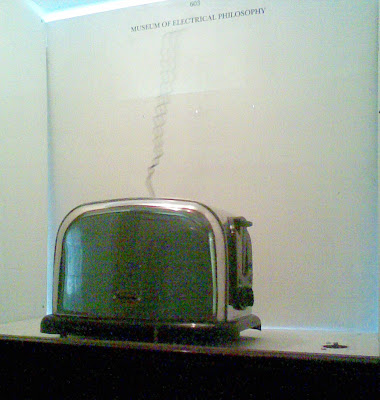 january is gallery wasteland time: everyone’s on holidays, there is hardly any stuff to see. the artlife sensibly took some time off over the summer break; but no, here at she sees red, i blather on about fridge magnets, books, cartoons and mix tapes.

and i didn’t really go and see that many galleries.
ok, so some of them were closed. but mostly i was being lazy starting a new job and moving house. slack bastard that i am.

however, here are a few little tidbits of stuff that i have seen since the end of last year and i promise that i’ll be back on board next week 🙂 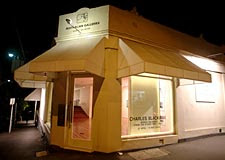 I’m yet to see an absolutely outstanding show at this gallery. that’s not to say that they’re not capable of it, i just haven’t seen anything yet. and don’t worry, i haven’t given up hope (just in case anyone from the gallery happens to read this shite).

the summer “all-star cast” type show is a good way to get a bit of a taste-test of what the artists represented by the gallery are doing. Some highlights of the current show include theworks on chairs, kitchens, domestication by katherine hattam; the beautifully strong and analytical, yet fabulously loose watercolour works by graham fransella and the almost-sculptural cut-outs of tree drawings by rosalind atkins.

my personal low-light was seeing a work by GW Bot which so closely represented a work by old-school italian artist alighiero boett, whose work featured in the UBS Drawings series at the Tate Modern, that I was shocked. i hate it when that happens. especially because GW Bot is a great printmaking/draftswoman, as seen in her work, glyphs [a graphite drawing on Colombe paper, which resembles the texture of a sanitary pad – awesome!], that now it’s all a bit mucky. i know that nothing is original, but when something is so close it hurts, well, it hurts.

i popped in to this opening with a friend, quite looking forward to seeing rob bartolo‘s work – he’s a friend of a friend and i had quite liked what i had seen of his previous paintings: a little ed hopper feel, a little geoffrey crewdson light. so when i walked in to see a ring of fire. well, a ring of lightbulb barbed-wire bird cages, looking a little felix gonzales-torres, i was shocked and a little bereft. thankfully, the cages were a solid work: they were well-made thoughts about choice and incarceration, as well as throwing a beautiful shadow on the gallery wall, giving the space a sense of being within a cage itself. noice. 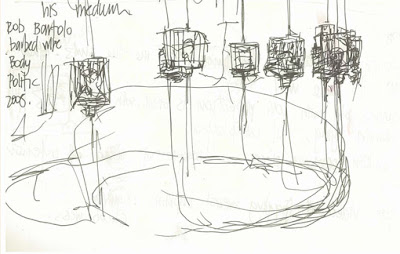 the other works were all a little, well, same-old-same-old. you know: the mashup of medium to look as unpretentiously un-put-together as you can possibly muster, while still appearing that they’re work. that seems to still be a ‘thing’. the main work i liked was quiver by jacob weiss: video work of breast implants jiggling. very simple, nicely shot and a slight barb at the silicone set. perhaps a bit of insight into what is now accepted as ‘breasts’ in contemporary visual culture and the difference between a pair of breasts in an artwork now, compared to, say, the impressionists. 21st century olympia? 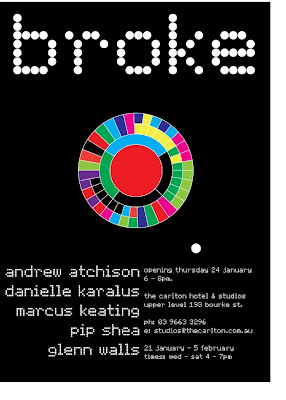 i was kind of looking forward to this opening. it wasn’t far from work and it was a lovely melbourne summer evening.

and so of course, the place was fucking packed, hot and full of kool things (which i am most definitely not), all of which reduces my patience and capacity to enjoy a show.

i did, however manage to pop into 3 of the rooms and although i’m hoping to go back and check out the rest of them.

glen walls is doing some really interesting stuff. and when i say interesting, it’s something that i can smile at, something that comments on deeper/wider issues than the latest vice magazine, and well made. the works in broke are a distortion of the disco ball and of sport culture. there is a fantastic soccerball skull – a la ricky swallow/damien hurst; a great skate deck: less is a bore, consume more and his disco modernist building on wheels. i love his site and you should check it. even if it’s just for the great typeface he uses.

blindside
IV
i really wanted to see this show on friday, so after work i raced down flinders lane and up the lift of the nicholas building. only to stand facing a shut door. that’s what happens when you don’t check the art almanac and assume that the gallery is open until 6. i’ll pop in later in the week.

i did, however, get to see the great little toaster kinetic work centre for electrical philosophy (above). 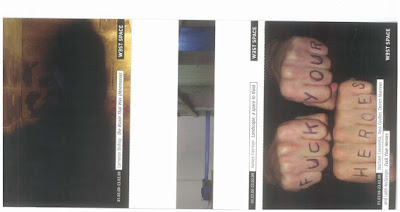 on the way back from the market on saturday afternoon, i popped into west space to check out their first show for the year and i wasn’t disappointed. well, i was, but only a little. more on that in a bit.
fuck your heroes is an hilarious look at iconography in the modern age, especially male iconography. focusing on nu-masculinity seems to be a running theme with quite a few aussie artists at the moment, and these boys have done it with a healthy dose of humour. my favourite being the video image of the artist standing naked in the CBD, as though a monument, with carrot stuck up his arse… literally. brilliant.

and then those wooden sculptural knuckledusters were an object of such beauty, i would love to own them. tough stuff. 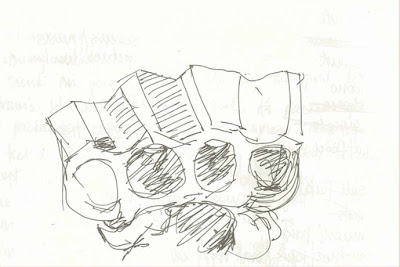 i love it when artists totally take over a space and cameron bishop did this to an amazing level: you walk into the gallery , shut the door behind you [it’s probably not the nicest if you’re claustrophobic, but it’s not too bad] and follow a mini-corridor, up a couple of lovely carpeted stairs, sit down on the chair (which trips the lights off) and you watch a movie through a peephole in the wall. the whole action of it was fantastic. i hate being ‘controlled’ by a piece, but this one led me by the hand in a way that i was utterly obliging. the only thing that was slightly disappointing was the video work was a little, well, slightly anti-climactic. which is possibly the whole premise of it, but given that most people don’t have the patience to watch an especially long video piece [well, i don’t anyway], the fact that i could easily have sat and watched a whole lot more than 15 seconds of loop seems a missed opportunity. but it’s a forgivable missed opportunity, so go and check out the work anyway.

and the work that was in gallery 2, by aimee fairman was visually fantastic – in many senses of the word. crates, housing peep-show dioramas of dark forests, swirling in [dry ice] mist, they were beautiful to look at. the only kind of disappointing thing was that the crates were jacked up on scissor lifters, to give this whole bare-bones factory/process appearance, which was completely unnecessary and a bit naff. hany armanious does great work with that ‘show your workings look’. this stuff was engaging and stunning enough as it was without having to justify with a particular visual code that seems to be ‘acceptable’ to a particular set.

all in all, though, it was a fabulous show and the reason that west space is king in this town, and i can see why i didn’t get a show there – my idea was shit, compared to these 🙂

and for those 3 regular readers, who are feeling the distinct lack of capitals in this post; i’ve been really good lately, making sure that use them. but i’ve decided to go back to my more comfortable lowercase ways for a bit. sorry, but you’ll have to deal with it