hi. i’m back. things are looking up again. and last week i went to the art deco exhibition with my nanna. we had a lovely time, listening to the cairo jazz band, watching the balancing act (people, balancing on each other, not my work/life schedule) and having yummy food. the show itself was kind of disappointing – lacked a certain rigour that would have produced a fantastic survey. unfortunately, the NGV is starting to make this slap-dash blockbuster approach a bit of a habit, really.

anyway, going through the exhibition, i started to notice how much the stripe featured in the decorative arts from the 20s/30s. especially out of germany/austria, but lots of other works as well.

of course, not being able to take sketching materials and/or cameras, my visual evidence of the supposition is a little, well, light-on. but trust me, once you start to see it – it’s there. a lot of the collection from the NGV itself (as opposed to the V&A, which the rest of the show is from) has furniture designed in vienna, all featuring detailed striped inlay edges and stripes across handles. other stripe to be seen: 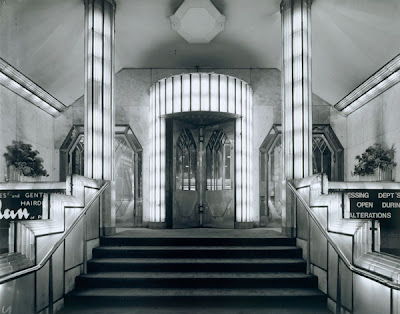 ok, so i may have a stripe obsession at the moment, thanks to the candystripers stuff i’ve been working in with miss jones, but it’s still interesting to think about. especially in terms of what the stripe has meant in fashion/civic life.

the stripe is a particular mark because of its balance between space and non-space; colour and non-colour. i think derrida would like the stripe (it might reflect his hauntology). which is even more interesting in terms of political times of art deco – post/pre-war, depending on what country you’re in and a time of economic flux. the relationship of the stripe to prisoners of war is also looking a bit sinister, in relation to the art deco period.

i’m not sure how purposeful or considered the stripe was as a motif in decorative arts of the early 20th century, but now that i’m starting to see them everywhere, i have a feeling i’m about to find out.