yesterday was the amazing SLAM (Save LIve Australian Music) rally in Melbourne.

there has been quite a bit of press and lots of pics about it already, but of course i need to put my 2c worth in. [which, with rounding is fuck-all really]. it has thrown up a wealth of things for me to think/write about, so bear with me. 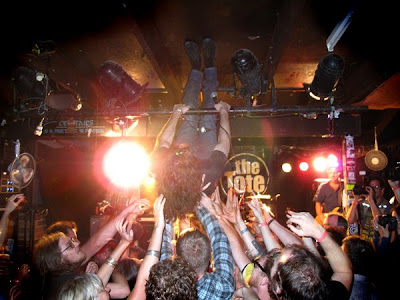 if you’re new to the scene, or slow on the uptake, there’s a bit of a background whinge here. basically, the state govt have been trying to curb violence in the CBD clubs through the liquor licensing system after a death outside a club one night by a guy who had drunk a whole bottle of wild turkey. which he had bought as a takeaway from the club. a shit event, but hardly the right brush to tar everyone with.

most venues that serve liquor, that have amplified music (ie clubs, pubs. and maybe shopping centres and airport lounges) are deemed ‘high risk’ and now require a higher licence fee, two security guards for any ‘event’ and the stigma of ‘high risk’.

and, as mentioned yesterday, this is all fine and dandy for a decent number of venues in melbourne, it is crippling for those in the country towns, which only have one venue. and, as also mentioned yesterday, these are the places that employ a music industry: musicians, sound engineers, music technicians, events managers. these laws are crippling the distribution networks for these businesses.

now, when the supply chain for the banking industry went pear-shaped last year, the bankers used the media outlets to have their whinge. yesterday, musicians and music-lovers took to the streets and made it a very public affair, reflecting the very public nature of the issue. thousands of us made our way from the state library, the site of knowledge, cultural heritage and civic research, to the steps of parliament: the site of democracy, public governance and civic responsibility. it was a fitting track and the way was packed with people and some shit-hot placards.

dell has some great pics, including my favourite one: psychedelic freaks vote too.

i wanted to make a placard saying ‘how am i supposed to procreate if all the music venues close?’ but i never got around to it.
and of course the best one was ‘it’s a long way from the top if you bury rock’n’roll’. naturally it’s not just about rock’n’roll – one of the speakers told a great yarn about the fabulous reclamation night out with her greek friends, where they went to a greek taverna, then went on to dance to gypsy, australian folk and latin music – all on the one night. ace.

i also got thinking about the actual sounds of the protest. as we walked, you would hear the faint rumble of a cheer and you would cheer – it was the sonic version of a mexican wave at the cricket. a beautiful thing.

and then the crowd clapped. in time, to a harps player. what group of people can clap in time without live music? ever been to the football? heh.

and of course the way the air in melbourne changed with the different music styles. the crowd became equally gooey and restless when wilbur wilde and his jazz crew soothed us into the late afternoon.

it was amazing to hear sound in the city on such a grand scale with an experience usually reserved for a small scale. and to have music quieten a crowd that is usually loud and boisterous and chaotic. it was a special moment and i do wish that i had documented it in a more profound way.