yesterday i was on my way to work and came across a wonderful gift to the world. the residents of 34 nicholson st, had left a whole bunch of books out on their verandah with a sign saying ‘free to good home’! 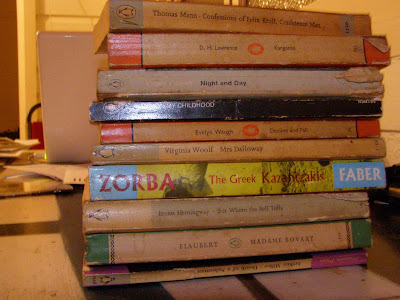 these free books weren’t lame fiction that you would gladly walk on by either, i picked up a small pile including classics such as:
evenlyn waugh‘s decline and fall,
thoman mann‘s confessions of felix krull,
flaubert‘s madame bovary,
arthur miller‘s death of a salesman

and the clincher for me..
dh lawrence‘s kangaroo (i had made a note last week in my phone to borrow this book from the library!).

as i was writing a little thankyou note to them on their sign, i realised what a fantastic act of altruism these people had completed. they could have sold the books, or given them to Goulds, sent them to the op shop or kept them for themselves, but by putting them out there for people to pick up, they gave people like me not only a pile of excellent and necessary fiction, but a fantastic feeling of discovery and inclusion with them, by sharing their books.

so to the residents of no.34, thank you.

thinking about the gift of the written word, i came back to a post i had been slowly constructing about the written word 2.0 – on the web and especially through blogging. british-german artist and my long lost cousin* marcus brown has written a wonderfully heartfelt post about the phenomenon of online connection and i wanted to add to it.

before Alexander Graham Bell made things a whole lot easier for us, the written word was the main way we got to know people and allowed others to know us. Letters were written and delivered regularly, books were treasured, journals kept and the style and tone of a person’s writing was the primary way to know anyone not living within a horse-ride. A variety of technological advancements meant that we became far more accustomed to relating to people in a far more empirical manner – through the sound of their voice, or the expressions on their faces, especially once televised communications cruised onto the scene. Now, although we’re certainly in an age of increased imagery, the advent of the far more interactive internet v2.0 means that we are also communicating again through writing.

we have revolved to judging others on the power, tone and truth of their written word.

in the last couple of months, i’ve found myself a bunch of strange and inspiring online communities, through the blogs that people write and the comment threads that accompany them. And unlike the early chatrooms of the internet, the communication and cameraderie in these ‘spaces’ feel quite authentic, attached to some real discussion and self-disclosure (and i’m not talking teenagers talking about their crush on jesse mccartney here). 10 years ago i used to hang out in a mountain-biking chatroom through yahoo. believe it or not, i was mad for MTB, until i busted the radial head on my right arm and still carry a pin in my elbow because of it. anyway i made some friends there and ended up biking with one of them.

and when i think about it, i believe this is the key to the traditionally-illogical-but currently-quite-normal interaction between bloggers – equal amounts of honesty and disclosure. if someone posts anonymously on my blog, or doesn’t link to their own blog (unless i already know them), i’m highly unlikely to give a shit about them. however, when there’s a reciprocal blogger, i’m open to checking out their blog and becoming their ‘friend’. most of my online friends have been found that way and i think they probably operate similarly. not an absolute rule, but it’s certainly a large part of how i interact online these days.

the thing i love about this whole blogging connection is the fact that i’m hanging out with kids who, given usual social circumstances, i would be too shit-scared to talk to.

talking about this with a friend who isn’t quite so open online, i explained to her that although there is a level of anonymity afforded everyone online and this opens us up for exploitation, those of us who generate online content and spend the amount of time on others’ sites (like i do), we can see a bullshit artist a mile away. it’s very clear, very quickly who is been much less than authentic and they don’t actually ‘last’ that long as no-one really bothers to pay attention to them.

i think that for the most part, humans crave authenticity and i believe we perpetuate that in any place we interact. whether that face to face with a handshake, or online with a thought-provoking comment. maybe i’m naive and have actually been chatting with a bunch of murderers and paedophiles, but i actually don’t think so. hell, even lonelygirl15 was ‘outed’, when people could easily have continued to believe unquestioningly. the thing about technology and the web 2.0 is that humans have created it, so it’s unlikely going to be that far removed from a sense of humanity, even at its most inhumane.

i’ve been accused of being wedded to the web, and while i’m not the biggest technolovinwhore i know, i am grateful for growing up when i did, being open to the changes in communication and the resulting connections i’ve been able to have through my words online. and whilst every now and again i shake my head in marvel at the surreality of ‘meeting’ people through bits and bytes, there is a larger part of me that accepts that this is actually quite normal and am thankful for my ability to read and write.

*marcus isn’t really my cousin, i just thought i’d be a bit cheeky. but with a common surname like brown – who knows!