Saturday afternoon, Age and I finally caught up for a good ol’ natter. Three hours later and we had covered everything from NYE to car demand ideas (with a weird space-jump in between), love, sneakers, europe, music and pretty much everything in between. He’ll hate me for saying so, but hangin’ out with him is like hangin’ with my clued up, spunked up, lovely kid brother. 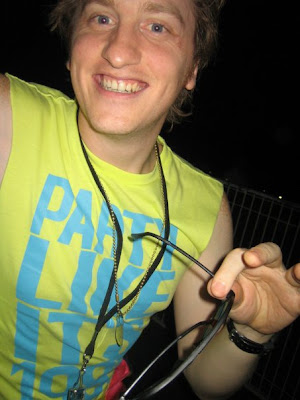 One thing specifically that we chatted about (and, surprisingly agreed on – ha!) was the humble mix tape and how much both of us love the whole concept of sharing music with friends and lovers. I miss being able to knock up a mix tape (thanks to a limited iTunes library and all my CDs and vinyl in storage), but I absolutely love the mix tapes I’ve been given, which I’ve decided to share with you all: 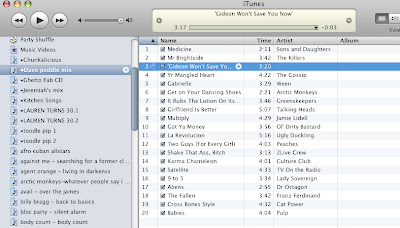 •The Dave Peddle Mix
For my birthday, a dear friend of mine, artist-in-waiting Dave Peddle, made me a mix tape of the coolest shit ever and it pretty much accompanied my trip around Europe. See the cool stuff on there? Mr Brightside by The Killers, Jean Grae, Peaches, Aliens by Dr Octagon (which is my marching-through-paris song), and Gabrielle by Ween (my iPod singing song).

I wouldn’t ordinarily have half of that stuff in my collection, but that’s the fantastic thing about the mix tape, you get to try new things, in a customised kind of way!

•Toodle Pip 1 & 2* by Young William
When I was in London, Will and I hung out a lot. Both of us were unemployed, opinionated and music snobs, despite otherwise being polar opposites. Will’s knowledge and experience of (especially british) pop music is fucking phenomenal and I asked him to make me a mix tape before I left. There is such cool stuff there! [He only had 2 points deducted for including an ABBA and a Smashing Pumpkins song in there]: Clampdown by The Clash, Blackbird by The Beatles somewhere in there, and my personal favourite, Love Grows (Where My Rosemary Goes) – starting with the perfectly apt lyrics: ” she ain’t got no money, clothes are kinda funny, hair is kinda wild and free”

Toodle Pip 1 & 2 have now become my soundtrack to being back home, having left some of my heart in London. Plus, I’ve definitely gained a finer appreciation for some of the classics and for that really sweet, well-crafted pop tune again.

*There is a Toodle Pip 3, but I keep losing it and it hasn’t made its way to the library yet. 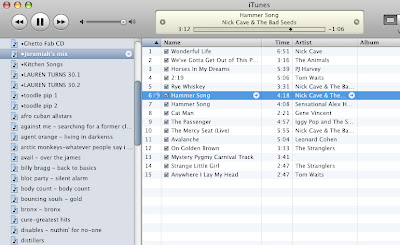 •Jeremiah’s Mix
This one I found by accident! Before I left to go OS, one of my oldest, bestest buddies, Jem sent me a package returning my copy of The Dresden Dolls CD [which he had pilfered for 4 months before I even got to listen to it, haha], plus a bunch of other cool stuff that I needed to listen to: Tom Waits, Nick Cave (both Bad Seeds and Grinderman) and then this random disc with no writing on it that I thougt must’ve been blank. I didn’t import it and left it back in Australia.

Then, yesterday, I get in the car to listen to some Grinderman, I put this mystery disc on, just to see what was on there and fuckin’ hell, there’s this awesome mix tape on there!

There is some serious music cred happening there, plus the cheeky bugger included On Golden Brown and The Passenger, two of my secret favourite songs of all time! I love my friends!

It is exactly this really personal, cool, loving thing about mix tapes that I totally dig. I even still call them mix tapes, despite the last time i made one on a cassette was about 6 years ago, when Caroline from Big Heavy Stuff organised an aussie mix tape Yahoo group, but hey, it doesn’t matter.

I’m slightly miffed that my current iTunes doesn’t quite get the concept of the mix tape – with all of these CDs, I’ve had to laboriously search for what the tracks are because ol’ Gracenote can’t identify the burnt CD, but hey it’s only a minor detergent [sic].

Now, with all this musical goodness happening, I’ve got a renewed love and excitement for the mix tape, so watch out some of you 🙂